What is Predictive Analytics?

What is Predictive Analytics?

If we ask Wikipedia for a definition, this is what comes up:

In short, we attempt to predict the future using analytics tools, statistics, and data science. We build, test, and deploy models to forecast what is likely to happen.

Predictive analytics has existed since humanity could count. The discipline of predictive analytics really began in England in the late 1600’s. In his excellent book Uncommon Grounds: The History of Coffee, Mark Pendergrast detailed the founding of Lloyd’s of London, the famous insurance market. Lloyd’s was originally a coffee shop near the harbor, and various insurance underwriters drank coffee and discussed the likelihood that various ships at sea would successfully complete their voyages.

Insurance underwriters attempted – with varying levels of success – to predict which ships and cargoes would survive perilous ocean journeys. While they lacked computing power, they were accurate enough that Lloyd’s of London was able to change from coffee to insurance and remain one of the dominant insurance markets for over 330 years.

Predictive analytics became a discipline unto itself during the 1920s when stock markets – and their capital – fueled interest in predicting numerical outcomes and time series analysis. By the 1970s, researchers George Box and Gwilym Jenkins published the book Time Series Analysis, the definitive work on predictive analytics, to describe how to use data to predict future outcomes over time.

However, predictive analytics remained largely an enterprise and academic function until the 21st century due to lack of computing power and available software for the average worker or student.

By 2010, interest in the field began to rise substantially, and it’s at its highest today.

Why is Predictive Analytics Important?

In the hierarchy of analytics, predictive is the first stage in which we stop looking backwards at what happened and begin looking forwards at what could happen. It’s a landmark shift in how we think about data. 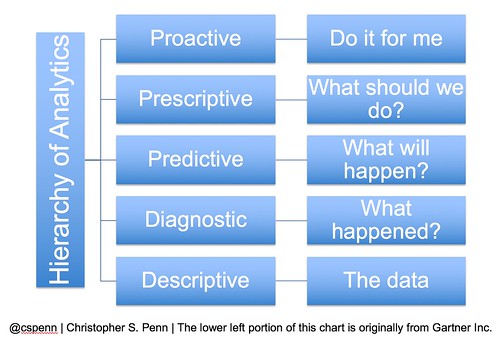 For example, imagine driving a car using only the rearview mirror. How quickly and safely could we drive? Chances are we could only drive at very low speeds, in very contained environments, if we wanted to arrive at our destinations safely – and we’d still have a few minor fender benders along the way.

Predictive analytics is driving using the front window, albeit a somewhat foggy one. It’s a significant improvement over the rearview window; we still need to be cautious in our driving because it’s foggy. Yet, we’re able to drive much faster and more reliably when we use predictive analytics well.

What Are the Limitations of Predictive Analytics?

When we use predictive analytics, we train our statistical and machine learning software on what has happened in the past. Thus, predictive analytics are built on data models of what was. For most applications, this makes a great deal of sense – lots of things in life are cyclical and seasonal. It’s a sure bet that consumers search for “holiday gift guide” every fourth quarter. It’s a sure bet that marketers search for “marketing plan” at the end of every January, after the annual sales kickoff in the middle of January.

However, we can’t predict true unknowns. Predictive analytics software has been used by investors for decades to attempt to predict the stock market, with abysmal results for the last 90 years. No amount of predictive software has successfully identified market crashes, because they are highly irrational. Predictive analytics cannot identify major news events; by definition, news is something new and likely unforeseen.

What’s Next for Predictive Analytics?

For marketers, the next evolution of analytics is prescriptive, where our software helps build a recommended course of action. With machine learning and artificial intelligence, we will be able – with high-confidence predictive models – to determine what to do next in a programmatic way.

Today, humans still need to interpret the results of predictive analytics in order to extract maximum value from them. As computing power continues to increase, expect that to be automated.

How Do We Get Started With Predictive Analytics?

If you don’t have the time or resources to develop in-house predictive analytics capabilities, look to agency partners and vendors. Many vendors are integrating predictive capabilities into their software, such as IBM Watson Analytics.