A few weeks ago, I made the declaration that I was going to change how I used Facebook. So far, it’s been an interesting experiment. Let’s see what’s changed and what’s working (and not working).

One of the biggest changes is that the content I post to Facebook which was formerly on my personal account is now on my page. Operationally, this is a matter of which box I type in, but in terms of people I’m sharing with, it’s a pool about half as large. That’s a consequence of effectively changing pools of audience. 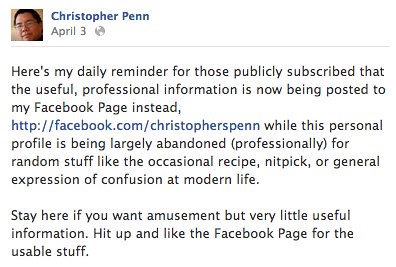 I write up #the5 in 140 characters or less for Twitter because of Twitter’s message limitation. For Facebook, I’ve been writing up a much more enhanced format that makes use of the fact that you can practically place a novel inside a status update. However, the longer format is also potentially more taxing on the reader, so I’m going to be experimenting with it a bit, since individual post virality is significantly lower than it used to be.

Overall level of activity and audience is definitely and very obviously changed:

Unsurprisingly, when my activity mirrors what Mr. Zuckerberg said was the core goal of Facebook at the F8 Conference (SHARE ALL THE THINGS), Facebook’s system responds well to it.

Here’s the final conclusion, and the reason why I’m continuing my experimentation and testing of Facebook to make it work.

Look carefully. Facebook represents 1.71% of my site traffic in the new testing period, versus Twitter at 7.1%. In absolute numbers, you’d think I should double down on Twitter and fold on the others, right?

Except when you consider that 886 people like my page on Facebook and 52,000+ people follow me on Twitter, Facebook’s traffic per fan is significantly higher. There’s a significant upside to my Facebook audience, so it’s back to the lab again to see how else I can experiment and grow.

Of course, I’d invite you to visit and enjoy my Facebook page.