For those of you who are not finance nerds, there’s an important term you’ve likely heard in the last few months, especially with regard to acquisitions and mergers. That term is the P/E ratio, or price to earnings ratio. This is a number that indicates a level of belief in a company – the higher the P/E ratio, the greater the confidence that investors believe the company is capable of growing and delivering profits on their investments. 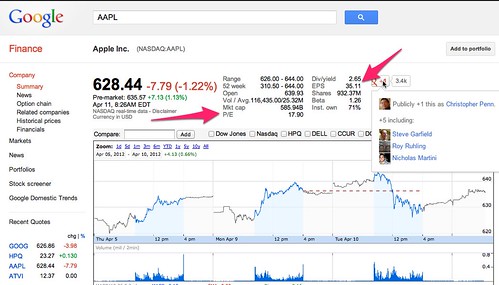 P/E ratios aren’t terribly useful in and of themselves; what they’re really good at is telling us a story about a set of companies. For example, Apple has a P/E of 17.90. Dell Computer at the moment has a P/E of 8.64. HP has a P/E of 8.21. Investors think, therefore, that Apple is roughly about 2x more valuable than its nearest competitors. They think that Dell and HP are about equally valuable.

What does this mean for Facebook? Well, right now various folks are saying its initial valuation is about 100 billion, and its current earnings are1 billion. Since it hasn’t gone public yet, we don’t have an earnings per share number, but the closest P/E ratio is still 100, based on its current earnings and valuation. Think about that for a second. Investors think Facebook is more than 5x more valuable than Apple based on P/E ratios.

Let’s evaluate Facebook’s nearest competitor, Google. Google’s current P/E is 21.07, so again, investors taking a gamble on Facebook are in effect saying they think it will be 5x as valuable as Google. Now here’s the question: does that match up with reality? Will Facebook truly eclipse the value of Google and Apple? Time will tell.

Now let’s talk about Instagram briefly and Facebook’s acquisition of it. Instagram has no revenue stream. None. Zero. Which means that you get a nice DIV/0 error if you try to do a P/E ratio analysis on it. The closest thing we can come up with is that they raised 57.5 million over two years with the most recent round of funding at50 million. Now do the math with that as your “earnings” and it places a speculative P/E of 20 on Instagram. Do you think that a company with no revenue model is as valuable as Apple, Inc.?

These are obvious signs of a bubble in the space, something that I spoke to recently in an interview with Marc Snetiker of Entertainment Weekly. What should you be looking for? If you’re in a startup now or a company that wants to ride the bubble train, expect an all-out burn to acquire audience as fast as possible. If you’re looking to make investments, ignore P/E and focus on the fundamentals. If you’re looking for the next big thing, take a look around in the space for whose P/E ratios are out of line with the rest of the market and industry, because that’s probably an indicator that they have enough buzz to temporarily defy the fundamentals of the market – for now.