You Ask, I Answer: Why is ChatGPT All The Rage? 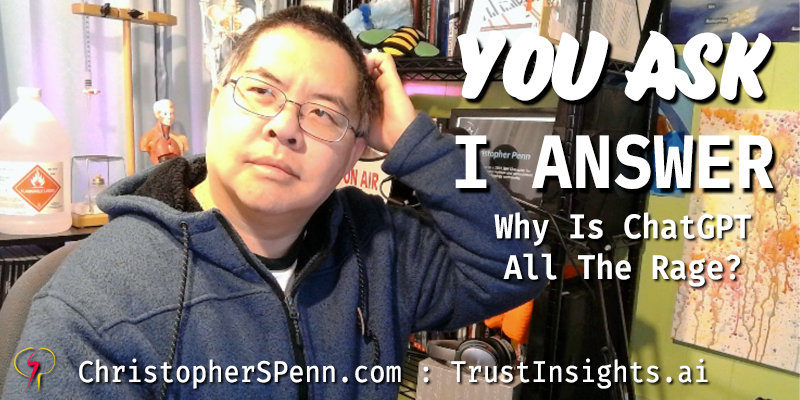 Donna asks, “So why is ChatGPT all the rage now?”

Chat GPT is popular because it is an easy-to-use interface for the GPT-3 language model. It allows people to easily interact with the model, ask it questions, and give it tasks. It has opened people’s eyes to the capabilities of large language models, as it can generate coherent, high-quality text. People are using it for a variety of tasks such as writing term papers and assignments, generating blog content, and more.

You Ask, I Answer: Why is ChatGPT All The Rage?
Watch this video on YouTube.

In today’s episode, Donna asks, “Why is Chat GPT all the rage now?” If you’re unfamiliar, OpenAI Corporation released a new interface to its GPT-3 model. GPT stands for “General Pre-Trained Transformer”, and it’s a large language model that has been accessible to people for small fees for a few years. Last year, they released a chat interface to it, so that people who had no technical skills whatsoever could chat with it and discover what the GPT-3 family of models was capable of.

So why is it all the rage now? It’s because it’s easy. The previous version, “Playground”, is very easy to use, and provides a writing space as well as controls to tune the performance of the model a little bit. But for a lot of people, that blank box, along with the buttons and knobs that have words that they don’t necessarily understand in the context of a generative AI, is still intimidating. A chat interface, something that looks like a chatbot or a text message, is something that people understand and can use right away. People started to talk to this thing, asking it questions, giving it different tasks, and as expected, because it was the same model underneath, it did a great job. People were able to have it generate tweets, rewrite lyrics as parodies, write horoscopes, and more.

It really opened people’s eyes to the capabilities of what large language models can do today. In the last four years, they have evolved very quickly and can now produce coherent, high-quality text. People started using it for every possible use case, like writing term papers and assignments, generating blog content, and more. And because it’s a less intimidating interface, it has taken off in a way that the previous version didn’t.

So that’s why Chat GPT is all the rage now. It’s easy to use, and it removes a lot of obstacles for people. It’s interesting to watch the reaction to Chat GPT, as you’re now seeing a lot of other vendors building chat interfaces into their AI products. It’s a no-brainer when you see how people respond to it.

The next step for a lot of folks should be to use it with bigger or complicated prompts, or more detailed prompts that take advantage of what the model is really good at. For example, you can feed it a transcript of a meeting, and it can generate meeting notes and action items. This is a huge time saver, and it’s a great way to extract value from recorded calls and to miss fewer details.

Thanks for the question. If you liked this video, go ahead and hit that subscribe button.