Do you have a social network home base?

In the past I’ve talked about making sure your blog is your home base, which still holds true. If Twitter or Facebook or [insert network here] ever collapse, close, or become irrelevant (MySpace?), your blog or website will endure as long as you continue to grow it. 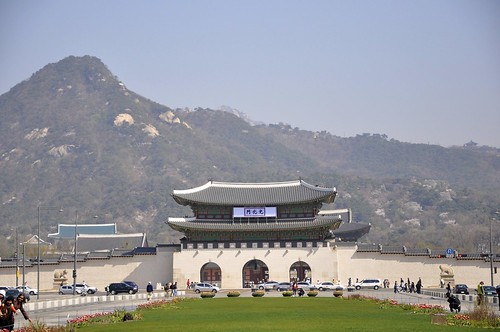 That said, you also need a home base social network. This is a network in which you focus more effort than others into growing. Ideally it has your target audience in it in some capacity, and ideally it provides some level of federated identity. For example, many sites now offer a “Sign in with Twitter” or “Sign in with Facebook” option as well as standard login forms.

Which network should you choose to be your home base? The first priority is wherever your target audience is. If you’re trying to build any kind of audience around a topic or a theme, then do the work to figure out which of the major social networks more of those folks are on. After that, decide which network’s federated identity scheme is more widely adopted. Right now, the main contenders are Twitter and Facebook, with LinkedIn and Google distant runners-up. I’m hesitant to recommend Facebook because most places have implemented authentication that uses your personal profile, which has a hard limit of 5,000 connections on it, whereas Twitter has no such limit. Right now, Google connects with your Google account and not necessarily your Google+ network (though I’m sure that’s coming).

Why does this matter? Three reasons. First, focus is important. Doing a little bit everywhere isn’t as beneficial and focusing in on one platform and growing it. There are only so many hours in the day; making the most of them demands focus.

Second, Metcalfe’s Law matters more than ever. Size does matter, for good or ill, and like attracts like in the social space. By focusing your efforts and attracting your right crowd in one spot, you increase the chances for serendipity and outreach beyond the borders of the friends you can contact directly. 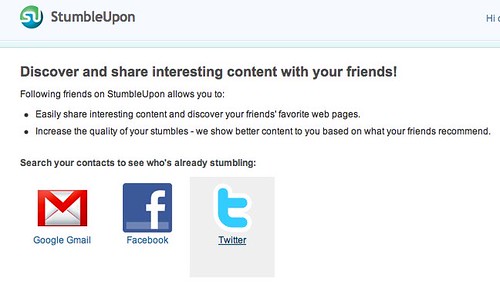 Third, a focused goal of growing one network (with federated identity capabilities) means that you can grow secondary networks very quickly using those federated identities. My network of focus is Twitter. When I connected up my Twitter account with Stumbleupon the other week, I took my SU account from 0 to 2,500 followers immediately because of my Twitter network. 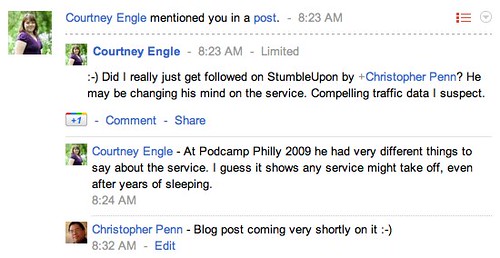 That’s enough to reap the majority of the benefits of Stumbleupon without focusing a lot of time or attention on it.

Take time to seriously consider your social networking strategy and if it’s not focused, if you don’t have a social home base, consider refining your efforts until you do.