One of the hardest lessons to teach anyone is the concept of delayed gratification, especially when the delay is over long periods of time. In the landmark paper, “Delay of Gratification in Children” by Walter Mischel, he explores the ways in which young children can delay gratification, from distraction to abstraction. Subsequent studies revealed that those people who could delay gratification as children were more likely to be successful as adults in longitudinal studies.

Delaying gratification is one of the secret “soft” skills that no resume or CV can ever easily reveal, yet if you need a soft skill in a team member, it’s one of the most valuable. A coworker, subordinate, or superior who can pull themselves away from staring at daily metrics or stock prices, put away the instant reward mindset (so very prevalent in social media marketing), and can focus on long term strategies and plans is far more likely to be successful than someone constantly looking for the next quick hit, the next viral video, the next shiny object. Someone who can work very hard on something very boring with no promise of immediate reward is going to be a tremendously valuable team member in an age when most of your coworkers and competitors are scrambling like rabid squirrels on meth towards any available shiny thing.

How do you identify this essential trait? One way might be gaming, ironically. If you know a game well enough, you can identify whether someone has a lot of patience working towards a long-term reward or whether someone goes for the quick hit constantly. Here are two examples from World of Warcraft (both mine, to avoid insulting anyone). 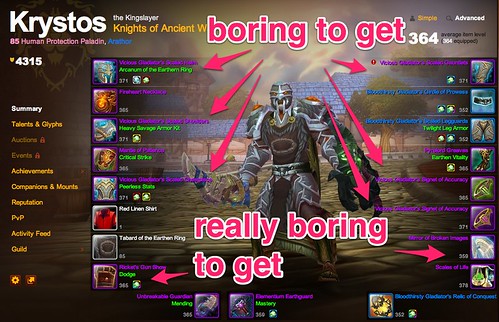 The first example is my paladin, who is one of my main characters. He’s equipped in gear that takes an awful lot of repetitive, very boring play to get. There are no fewer than 3 repetitive “grinds” needed to achieve this set of gear, from battlegrounds, Tol Barad dailies, and Mt. Hyjal dailies. Seeing a player decked out in high-end gear that requires a lot of monotonous, not necessarily fun gameplay would be an indicator of this personality trait. 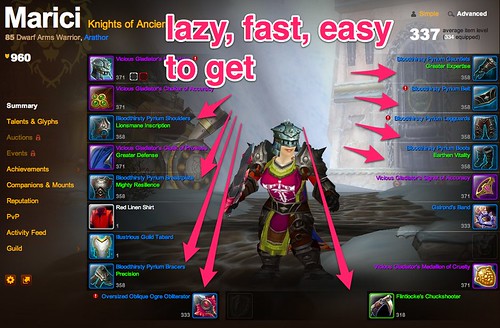 The second example is my warrior, who is a bank alt (non-main character responsible mainly for banking and transactions). She’s equipped in gear that you can buy instantly for relatively short money or items left over from questing to get to the maximum level. Very few of her items required any effort to get, and most of them are impulse buy items that, on someone’s main or only character, would indicate they’re not especially good at delayed gratification.

There are plenty of other areas where you can see the results of delayed gratification. It’s no coincidence that many successful businessmen and women are marathon runners – talk about delaying gratification over 26.2 miles. It’s no coincidence that so many successful folks play golf. You’re taking a stick and hitting a small ball across hundreds of yards over and over again. To prove that you’ve got the ability to really delay gratification, you have to do it 18 times in a row. Look at people who achieve high grades in martial arts – someone practicing for 20 years before getting a black belt has that trait. (conversely, schools awarding black belts after 8 months are probably not a place you want to invest your time in)

What about non-leisure activities? If you have a delayed gratification problem, you probably gave up your blog (or resorted to “phoning it in”) years ago in favor of the instant gratification environments of Facebook, Twitter, and other social networks. If, on the other hand, you can delay gratification for quite some time, chances are you’re cranking out blog posts of good quality over a period of years.

What if you don’t have the ability to delay gratification? Are you up a creek without a paddle? No, not necessarily. We’ll explore how to cultivate that skill in an upcoming blog post. Stay subscribed.