Which is moving the needle more, Twitter or Google+?

Google+ has been out for about a month, and has made quite a splash. With 20 million users in just a month, it’s become the darling of many a social media expert. But how much does it actually move the needle? How much influence does G+ really carry? Should you change your social media strategies? After studying how it tracks timestamps, I wanted to do a side by side comparison of G+ and Twitter to see how they stacked up and where the juice really was.

Initially, I looked in my Google Analytics. G+ was clearly winning the referring sites war at first glance, which is a claim many folks have made: 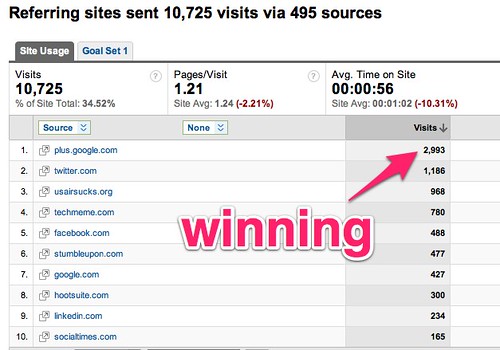 However, there’s a problem here. See it? Referring sites is 34% of my traffic, 31,069 visits in total. Google+ is less than 10% of site traffic. It’s not running away with an overall large portion of site traffic. There’s a second problem which becomes more clear here: 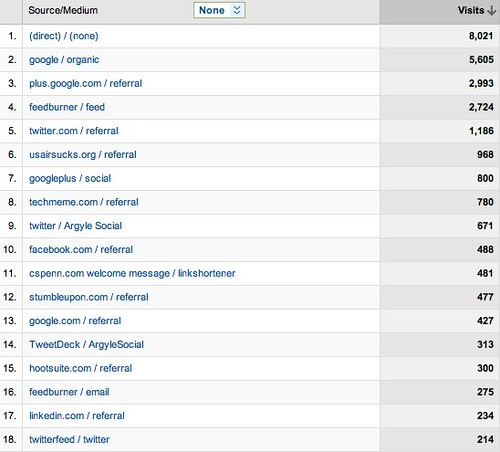 Because it has no API and no third party software, Google+ traffic is highly concentrated through just one source. Twitter, on the other hand, has third party apps all over the place, plus multiple, different traffic streams. Consolidating all of that and trying to attribute it would be a pain in the neck. What would you do to get the real answer?

Being a nerd, I decided to test it as best as I could. Existing link tracking tools like bit.ly don’t give you side by side analysis over a period of time at a granular level, so I ended up having to write my own link tracker. Very simple switch/case setup in PHP that created a timestamped text logfile of clicks.

Bear in mind, at the time of the test, my Twitter network was 38,000 followers and my Google+ network was about 5,000. Take that into account when you see the results.

The methodology was simple: Tweet and G+ all 10 links at nearly the same time and see what got clicked on. I loaded up yesterday’s #the5 in it, creating 10 different URLs and allocating 5 to Twitter, 5 to Google+. That way I could track not only clicks on my own stuff, but clicks on other people’s stuff too. I measured over a 24 hour period. 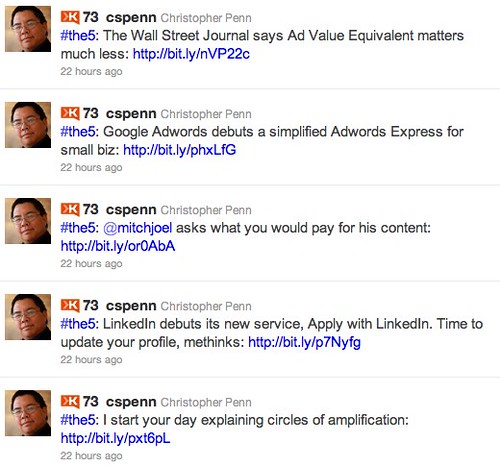 So, which is moving the needle? Here’s the clickthrough results over a 24 hour period: 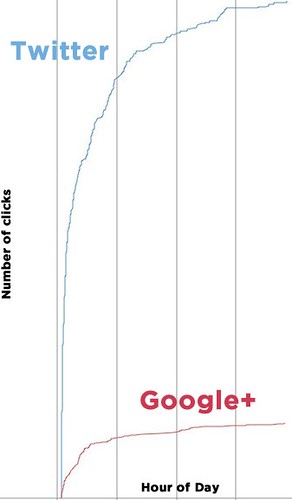 Twitter accrued a total of 1,042 clicks on the 5 links combined. Google+ got 158. Google+ got 15.2% of the clicks that Twitter did at 13.2% of the network size, so if you adjust the results, Google+ is about as good as Twitter at delivering clickthrough. If my Google+ network grows to the same size as Twitter, I would expect to see roughly the same results.

What’s interesting to me, however, is that the curve shapes for the results are very different. Twitter takes off like a rocket ship and then gracefully continues to deliver clicks throughout the day and night. Google+ packs the vast majority of its clicks in the first couple of hours and then the attention just vanishes.

A few items are worth noting:

1. Don’t blindly trust Google Analytics. Even though it looks like Google+ is delivering more traffic than Twitter at first glance, you have to dig into the data a lot more to see what’s really going on.

2. Twitter delivers more attention for longer than Google+ for this experiment. The reason why? I suspect it has to do with format. Twitter is a short-form social network, which means that scrolling back or catching up after a few hours away is relatively easy, especially if you don’t follow a ton of people. By contrast, Google+ is a long-form social network, so scrolling back a few hours can mean pages and pages of content. This also means that timing with Google+ is tighter if you need to generate attention. Based on my charts, if I wanted to sustain attention on a topic for a longer period of time, I’d have to repost more on G+ than on Twitter.

3. Google+’s performance, relative to network size, is in line with Twitter. This means that for me, I need to be participating in both places. One is not significantly better than the other, and growing both are a priority for my audience.

4. Test! Test, test, test. Do not blindly trust my results. I’ve built up a very focused network of a certain online persona, and I guarantee that your audience is significantly different than mine. What has worked here for me, what results I have gotten here for me is likely to be very different than what you’d get as a result.

If you’d like to do some peer review, here’s the URL text file of the 24 hour results as a plain text CSV file. The time codes are UNIX time stamps in order to make charting easier. You can slice and dice any way you like.