Last week on Marketing Over Coffee, I mentioned something I’m doing with Google+ called a circle of amplification. Let’s talk briefly about what that is. 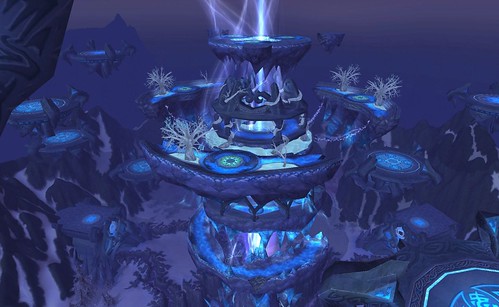 (photo of the Nexus, the ultimate circle, in World of Warcraft)

The circle of amplification – and it’s really called that – is a list I keep of people who have shared my content. This group of folks are different than everyone else on Google+ because they’ve done something, taken a measurable action, to support what I do. They’ve reshared a piece of content. This group of people is extremely important to me, because without them, the ideas that I have to share don’t spread.

Beyond the obvious (they share stuff), amplifiers are the heart and soul of your base. They form the core of the people who support you, and when it comes time to promote something heavily (as I did with my book at launch), they will be on the front lines of people who get the word out. If I don’t have a way of quickly identifying them and reaching out to them, then I’m relying solely on luck when it’s crunch time, and that’s not a healthy place to be.

How do you track amplifiers?

For the moment, it’s a manual process. I’m sure that as APIs and toolsets become available, it will get easier, but for now, I do it by hand for a couple of minutes a day. Here’s how: 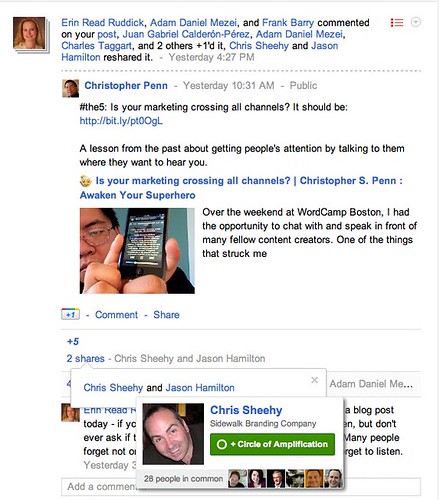 Find the shares at the bottom of every Google+ post, click the dialog box open, and then either alt-click the names into new tabs or hover over them and add them to a circle of amplifiers.

Google +1 inside of G+ tracks +1 on posts, not on pages on your site. It’s not nearly as valuable (you’ll notice G+ +1’s are not reflected in Google Analytics or Webmaster tools), and frankly it’s too easy. Sharing requires at least 2 clicks, if not a few words of color added to the shared item. +1 is too much like Facebook Like, which doesn’t really indicate any level of commitment. You could sneeze and accidentally +1 or Like something.

So I have amplifiers circled. Now what?

You’ve laid down some solid groundwork. For now, simply stay in touch. Share valuable content. Thank your amplifiers from time to time. Give them the best of your best so that they have continued incentive to share your stuff.

I plan on copying an idea from my newsletter in the future, as soon as I have analytical data to support it, highlighting members of the circle for their contributions and level of engagement.

What if I’m not using Google+?

This concept applies equally to Twitter via lists and even Facebook, though it’s a lot messier there than it is on Twitter or Google+. For Twitter, just add people to lists as they retweet you. For Facebook, you’ll need to friend your sharers on a personal account, which means you can have a maximum of 5,000 amplifiers.

What other circles do you create and maintain on social networks to track and reward people who support you?