Are there “right” and “wrong” ways to use Google+? There are right and wrong ways to use any tool. You can, for example, use a jackhammer to tenderize a steak. The result might be different, but if you’re especially skilled with it, it might work. Ultimately, the tool is theoretically capable of performing the action you want if you have enough skill to operate it. You probably can’t do open heart surgery with the jackhammer. No matter how skilled you are, that sort of work is beyond the ability of the tool.

Likewise, Google+ is a tool that has uses and as a result has some things that can be less or more effective. Let’s assume for the purposes of this article that your goal is to grow a large, valuable network that promotes real world goals for you, your organization, etc. What can we ascertain about social networks from their network and content philosophies?

Social networks generally come in two network flavors, asymmetric and symmetric. Symmetric networks are version 1.0 of social – to be my friend, I have to be your friend. To be my fan, I have to be your fan. Asymmetric networks are version 2.0 – you can follow me, but I don’t have to follow you in order for you to derive benefit from my work on the network. Twitter was the first to figure this out; Facebook took a while but finally implemented it with (Fan) Pages, and Google+ came out of the gate as an asymmetric network. 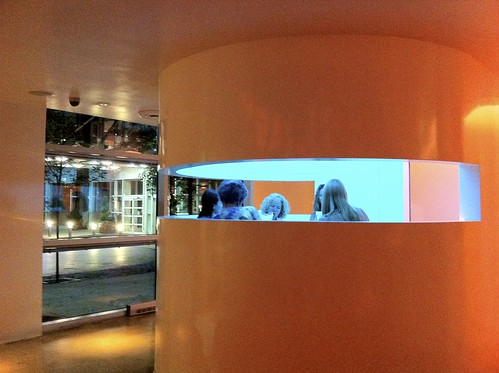 Why does this matter? An asymmetric network gives participants a great deal more freedom to post, to create, to do stuff, to be willing to connect. It gives users more choice: you can follow me, and I can choose whether or not to follow you back. The growth of our respective networks is therefore not dependent on mandatory reciprocity. Here’s the funny thing I’ve noticed about asymmetric networks: because reciprocity is optional, people seem more willing to connect than on networks where it’s mandatory, because they’re given a choice.

Social networks generally come in two content flavors as well, short form and long form. As much as we might appreciate brevity, it can be quite constraining to fit usable content inside of 140 characters. Short form networks excel at updates and notices of new content outside the network, while long form networks excel at providing usable information in-network.

To get the most out of Google+ or any social network, examine the behaviors that work well for their respective network and content types. Google+ is a long form, asymmetric network. What actionable conclusions can you gather from this? For the purposes of growing a large, valuable network, effective behavior on a short form network differs from a long form network. Effective behavior on a symmetric, mandatory reciprocity network differs from an asymmetric network.

In an asymmetric network, if you have a goal of network growth, connecting with more folks works better than connecting with fewer. This is how many of the folks who are Twitter personalities got there, especially in their early days. Why? Metcalfe’s Law provides the answer there.

In a long form network, if you have a goal of network retention and word of mouth growth, providing valuable content in network will give you better results than constantly redirecting people out of network. You don’t have to give away the shop, but you do have to provide more than just an endless stream of “New Blog Post:” updates or animated GIFs of Facebook vs. Google+. Why? Because in a long form network, your fellow users enjoy having a consistent experience of consuming things in network, rather than leaving and coming back all the time.

Can you use short form behavior in a long form network? Of course. That said, you will be operating contrary to the intended user experience, and your results may reflect this. Can you use symmetric network behavior in an asymmetric network? Of course, and in fact Google+ provides a unique hybrid that allows you to do both. You can have the attention-getting, socially promiscuous behavior using the Public circle while still maintaining a friends and family set of circles for a more focused view of certain parts of your network.

Does this mean there are right and wrong ways of using Google+? It depends on your goals, but generally, yes, there will be practices that are less and more effective for supporting those goals. Understanding your goals and then practicing the behaviors that correspond to the type of network that Google+ is will get you closer to the results you’re looking for.

Take a look at the behaviors you’re accustomed to using and figure out how they can be adapted to a network with different principles. For example, live-tweeting a conference has become very popular over the years. Twitter is an asymmetric, short form network. Google+ is long form, so instead of sending out dozens of mini-updates, you can post them all in one discussion and provide as much, if not more value, than the Twitter stream, as I did recently at the Wharton Web Conference: 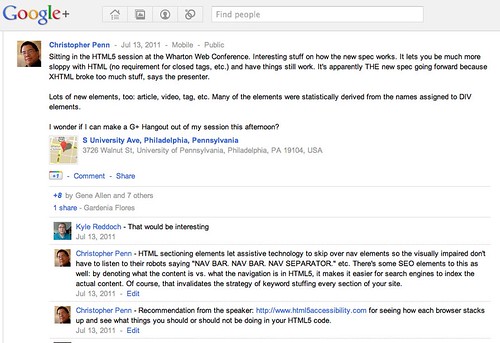 What other behaviors from a short form network could be converted to long form networks? Think about things like #journchat or #smchat – instead of a large pool of tiny updates, you’d have actual, large threaded conversations that were less constrained by length of update.

Why does this matter? Because in a new network, in a new set of grounds to play in, the people who establish “base camps” first have the advantage of momentum. If you’re an industry leader (or want to be), start creating the same digital properties inside the new network, adapted to the practices that work best in its symmetry and content nature. You’ll have the first mover advantage and momentum you need to establish your goals of network growth and reputation.

Google+ is asymmetric and long form. Are you using it in a manner that makes the most of those characteristics?