Looking at how everyone is trying to find a place for Google+ and all of the other networks, I thought I’d share the way things are shaping up and how I use them. You might find a few ideas you can use.

I look at social media sites from the perspective of what they do and where they fit in my “funnel”. Before we talk social, I should explain that I have 3 business goals I want to achieve with the stuff I do online.

1. Grow my database. Jeff Pulver says it best: we live or die on our database. For me, this means bringing people onto my mailing list and into networks that let me keep my data, such as LinkedIn. This database is a tangible asset – it’s helped people get jobs, supported the next two goals, and done some amazing stuff all on its own.

3. Sell stuff. Whether it’s copies of the Marketing White Belt book, the handful of affiliate programs I participate in, or generating leads for my employer, WhatCounts email marketing, I want to create additional revenue using the digital platform I have.

Ultimately, if the things I’m doing don’t support at least one of those three goals, then it’s probably not worth doing – or it gets bumped to the back burner constantly in favor of things that matter.

If you are using social media for business purposes, do you have a set of business goals that guide your social media work? If not, then please save this blog post to Instapaper or Evernote, close your browser, and don’t post a single thing on Twitter/G+/FB until you have those goals written out. Your goals and my goals will be different! For example, if you’re unemployed, one of your goals is likely “find work”.

Obviously, if you’re using social media for personal and non-commercial purposes, your goals should be different but equally meaningful, otherwise you’re likely to get caught in a giant time suck.

So, with these goals in mind, how do the networks shape up now for me? 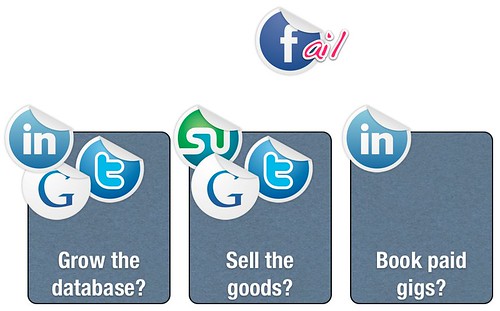 The nifty icons are from the socialize icon set.

Twitter: great for discovery of new people, which in turn feeds goal #1. Twitter is now about discovery and crossing networks/niches/fishbowls for me. It’s become the standard currency of influence for the moment until G+ releases its API. Twitter is how I find the new folks to bring into the network. Assuming I prove my value to them, they flow into goal 1 pretty seamlessly.

Stumbleupon: the dark horse of social networks. I use it, and more important, other people use it a lot, for discovering new websites. That in turn drives traffic to the website, which supports goal #3 heavily.

Google+: G+ has been a lot about engagement of an existing base. That said, because it’s an asymmetric network, there’s discovery happening there, so that does feed goal #1. Whether it will support goals 2 and 3 is yet to be determined, though I am starting to see it as a major traffic source.

LinkedIn: LinkedIn is the money network for me. It’s consistently been a powerful force behind a lot of what I do, and it’s an easy place to create social currency. Every time I forward a job request on or connect two people who should be connected, I pile up social currency, which in turn feeds all 3 goals. I’ve booked paid engagements right off LinkedIn, and its database is downloadable to feed the other databases.

Facebook: Facebook’s not doing much for me right now. It’s too siloed, too walled off to be of much benefit for SEO, doesn’t push a ton of traffic, and what it does push tends to be of low quality that doesn’t feed any of my goals especially well. I use Facebook personally to keep up with friends and acquaintances, but for supporting my business goals, it’s been a bust. Maybe my audience isn’t there or isn’t interested in behaving like my crowd while there. Whatever the case is, it’s not working for me.

A few folks responded in the Google+ thread about which networks were working for them; experiences differ I suspect largely because our respective audiences and goals differ as well.

Take some time to think about what’s working socially for you in relation to goals that matter to you. If your social media participation isn’t supporting them, either you need new goals or you need to pivot and change up what you’re doing in social and where.