This will be an unpleasant post for some to read. If you are in the school of thought that says numbers don’t matter with regard to things like Twitter followers, blog subscribers, etc. this post will make you angry. I would kindly urge you to close this window or tab and skip to the next blog post in your reader. You’ll be happier for it, I promise you.

Okay, now that only the dedicated few are left, I’m going to share something that’s been percolating all year. Bryce Moore, one of my favorite minds to work with, and I have been chatting about Metcalfe’s Law and how it applies to social networking. I credit our conversations together over the past year with at least half of this post. He did a great job fact checking me and ensuring that my logic and interpretation of the theoretical math was sound. Go follow him.

For those new to the concept, Metcalfe’s Law basically states that the value of a network is proportional to the square of the number of connected users to the network. A lone fax machine is just a copier with a phone line. A lone email account is basically an electronic sticky note system for yourself. As more nodes get added to the network, not only does the network’s value grow, but so does the value of your node, assuming you’re connected in some way to each new node. 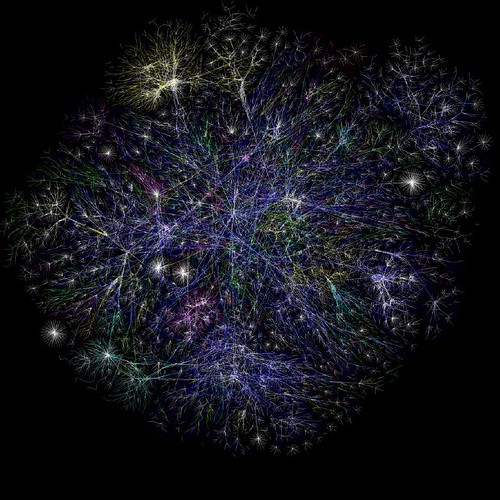 Metcalfe’s Law, however, was written for hardware. The assumption is that nodes are directly connected and are not recursive. A fax machine can connect to any other fax machine but can’t connect simultaneously to all fax machines. Social networks can. One tweet to your Twitter network reaches all nodes simultaneously (at least of followers). This makes the network that much more valuable and powerful.

Asked about social networking, Metcalfe responded in an IEEE forum:

This should explain and give you predictive abilities about any given social network. C is cost per connection – the cost of your time. A is the value per connection, or what you can expect to get for the time of acquiring the connection. N tells you how large your network needs to be before it reaches the point where its value is worth your investment.

Let’s look at Twitter. Twitter has a very low cost of acquisition – C. Acquisition in many cases is just a reply or following someone, in the sense that you don’t need much more than a single reply to initiate a friendship, a relationship. The connection starts with a single conversation, and the cost of that conversation is your time and not much more. (assuming fixed costs of an Internet connection, etc.)

A is the value you derive from that connection. In this particular formula, you don’t need much value if connection acquisition is easy in order for your network – your personal network, not Twitter’s – to reach a critical mass of value delivered to you. That’s why things like reply bots, spam bots, and DM bots exist – the network connection costs are so low that any nearly any non-zero value created justifies the use of the bot. This also proves the value of services like Klout. If you can reduce the minimum value nodes of your network, you will hit critical mass – N – much faster.

That also means that actively working to build your Twitter network isn’t a bad idea in and of itself. I know some folks like to call it card collecting, lunchboxing, or just plain whoring, and that’s fine. That’s a perspective that is valid and will give you value. It will not maximize your network’s value, however, and here’s why: recursion.

Recursion occurs less frequently in a smaller network because there are fewer nodes to repeat back a network update. In a larger network, recursion can sometimes be perpetual. I still see updates from six months ago bouncing around the edges of my Twitter network because they’re being echoed back and forth among the outer nodes. In a smaller network, this sort of recursion doesn’t happen much.

So now that you’ve gotten through the mathematical and theoretical part, what are the takeaways?

2. All other things being equal, connecting with higher value nodes will give you returns faster than low value nodes. Systems like Klout, however imperfect they are, will continue to matter as long as their data even roughly correlates with actual node value.

3. Being on a network does not constitute your network. Simply being there is valueless. Yes, you’re technically on Twitter or Facebook, but all of the nodes in the network are not connected to you until you establish some kind of relationship. Once you’ve got a relationship, only then does it become a part of the N=C/A equation.

4. The network is independent of participation. I wrote about this last week. Delivery strategy is independent of content strategy. You can and should build network as its own initiative. There is value in the network itself, and if you had a large network with no content, you’d still have something of value. Obviously, if you have great content, that increases the value of your node even more, but…

6. The more valuable you are, the more valuable you become. Metcalfe’s Law, because it’s exponential, indicates that once you cross that critical mass threshold, your network effectively begins to power itself. The faster you can get to critical mass, the faster you’ll get value out of it and the more value you’ll derive from it. This is more or less a mathematical reinforcement of the Matthew effect, a Biblical quote which states that the rich get richer while the poor get poorer. In social media, the more popular you are, the more popular you are. The difference is that you have the tools and access in social media that you don’t have in, say, financial investing. Getting started and growing out of a poor social network is much easier and faster than exiting a poor economic situation.

If you’re offended by the idea that you should just go around collecting friends, I’m sorry. I can’t change network effects or the way they work. Continue to do things as you see fit, and as long as you’re getting value out of them, then you’re “doing it right”. If you’re looking to get the flat out maximum value out of social media, however, you will need to take network effects into account and leverage them for your growth.