Anatomy of a book launch

On Monday, June 13, I launched my new book, Marketing White Belt: Basics for Digital Marketers, with a series of campaigns. I thought I’d share what was done and what the net effects were.

Obviously, first I had to write and publish the book. I went with the Kindle and Nook platforms because very little was required in terms of technical overhead. ePub and Mobi formats are little more than XHTML documents. someone, my editor, did the compilation in just a weekend of my writing and transformed it into eBook format ready to go. I loaded it up, set pricing and royalties, and the platform was ready to go.

First rule of any kind of product launch: have a plan B. I set up redirects on my short URL, cspenn.com, for Amazon, Barnes & Noble, the site, etc. so that I could move stuff around as quickly as possible. More on this in a bit. I created a dedicated landing page and copy for the book launch, along with a special edition of my newsletter.

I’ve long believed that marketing techniques work better together, in synergy, than just by one channel along or channel-by-channel sequentially. A very long time ago in Internet years, I was part of a campaign launched by Mark Yoshimoto Nemcoff called Bum Rush the Charts, which was an experiment to game the iTunes algorithm and put a Black Lab song (Mine Again) as far up the charts as possible. The lessons from that experiment informed a lot of this book launch. Amazon uses a similar algorithm as iTunes to determine its charts, so I would replicate Bum Rush’s mechanics for the launch.

To that end, I set up a timed launch of:

The blog post and newsletter were fairly simple to schedule and time. I created the landing page for the book several weeks in advance of the launch to ensure it got indexed by search engines, even if there was no book to buy quite yet.

I chose the time using Blue Sky Factory’s BlueView subscriber data, which gives me an idea of where my subscribers, my existing base, are located. That data got exported into BatchGeo.com, which I used to map out the subscribers for a visualization. While many are American, a significant number are also in Western Europe (especially the UK), so I picked noon Eastern time as it would be 9 AM pacific, lunch on the east coast, and 5 PM in the UK. 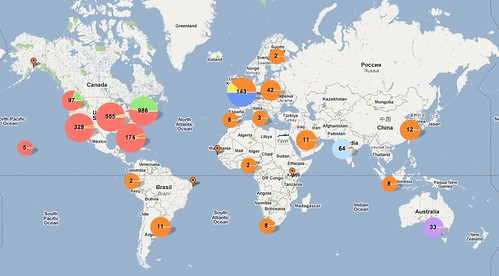 The materials were ready, the time was set.

What was going to be interesting was the social outreach. Using TweetAdder and some custom software I wrote myself, I took all of my followers on Twitter and scored them all using Klout, which took a bit of doing since there are 34,000 of them. Of those 34,000, I set up two data sets – the “friends and family” list of folks I’d reach out to who would gladly support the launch, and then the folks that Klout thought were influential. Different sets of people got different shortened URLs to track at least some level of action.

I pulled the top 140 by score after weeding out obvious wastes of time (as much as I’d like to think @barackobama would retweet me, the chances of it were near zero, so out he went), and created a separate landing page explaining what I was doing. The morning of the launch, I sent them all direct messages asking for their assistance.

Here’s the funny part: no one over a Klout score of 80 responded. There are just as many robots and PR folks running the top end of the Klout spectrum as there are at the bottom in the 0-20 bracket. Who responded? Folks with scores in the 65-75 range, real humans who were around, interested, and happy to help. As an aside, if you’re targeting “influencers”, you may want to skip the 80+ bracket.

How many folks out of those 140 responded? About 37, and they were very kind.

The launch kicked off on Monday exactly as timed, and the first set of tweets all hit the airwaves within a 5 minute bracket. As I suspected, the immediate onslaught of traffic destroyed my website immediately, dropping it like a hot potato. Remember earlier I mentioned plan B? Plan B was to change the 301 redirects I had given out to people to go directly to Amazon, thus averting a predicted problem. I was able to redirect the massive onslaught of traffic in less than 10 seconds and not lose any potential sales.

How did the launch go? Tweetreach calculated the effective reach of the campaign at close to 750,000 views/impressions/eyeballs, which was nice for the top of the funnel. The newsletter hit its usual metrics of about 10% open, 2% click, with a lot of action in the first few minutes.

But the real results? I cracked the top 10 of all marketing books on Amazon, hitting both the bestseller and hot new releases lists within 4 hours, beating out all but a few competitors like Malcolm Gladwell, Guy Kawasaki, and David Meerman Scott. At the end of the day, it’s all about sales, or the outreach meant nothing. Happily, everything clicked: 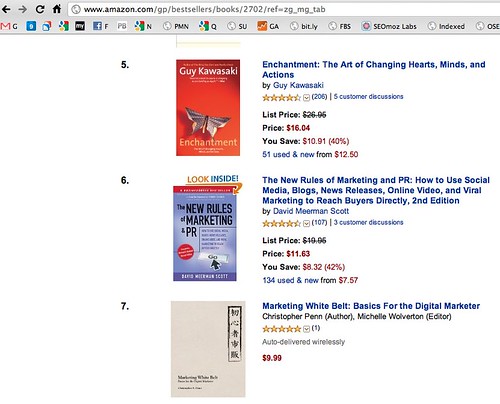 The stats at their peak.

That’s not bad for a book that’s completely self published with no support from a publisher or marketing agency at all, and it continues to sell well a week after the launch.

To summarize: marketing channels work better when you put them together. Email, social, blog, everything. Algorithms can be gamed to some degree. Have a backup plan.

I’d like to thank everyone who participated in the book launch for your support. It meant a lot and it clearly moved the needle.