In reading the latest “controversy” in social media about Burger King’s ad agency tweeting on behalf of the client and the furor over authenticity and transparency, I came to this conclusion:

If you haven’t been following along, here’s the very short summary. CP+B is the agency in question tweeting as the fictional King character for Burger King on Twitter. Some social media folks object to a lack of disclosure by the agency, a lack of authenticity.

Here’s a different perspective on the issue: ROI. What in the world was CP+B thinking? I’d love to see even a back of the envelope ROI argument for creating a Twitter account for a fictional character to sell sandwiches, which is the whole point of Burger King.

Forget about transparency, authenticity, and whether or not an agency should tweet as a client. What in the world is the ROI or even apparent value of this initiative? 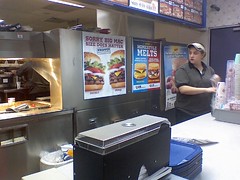 Here’s how I would have handled a client’s request to be engaged on Twitter: create a Twitter bot that you can message with your current location. It returns the three nearest Burger Kings so that you can get something to EAT, since the whole point of Burger King is to provide something for me to eat. I’d use it in a heartbeat when I travel. If Burger King and CP+B approached Twitter or social media in general from the perspective of being USEFUL, they’d get more sales and a measurable ROI.

It’s absolutely true that you can’t get precise ROI on social media. My work for the Student Loan Network means that ROI gets fuzzy, but the business connections, enhanced distribution of things like eBooks, inbound links, and other measurable activities are all improved by Twitter and social media. Can I put an exact dollar amount on it? No. Can I say that Twitter has improved the bottom line? Yes. Have I helped folks on Twitter get financial aid questions answered? Yes.