Can Causation Exist Without Correlation? Yes!

One of the axioms of statistics is, “correlation is not causation”, meaning that just because two data variables move together in a relationship does not mean one causes the other. The most common textbook example of this axiom is that consumption of ice cream and deaths due to drowning are not causative; eating more ice cream does not cause you to drown. In this example, the underlying variable is temperature – more people do both in warmer weather.

However, is the reverse true? Can causation exist without correlation? The answer is yes, but to understand the answer, we need to dig into the mechanics of correlation.

Correlation is a mathematical relationship between the change in two variables. As one variable changes, the other variable should also change in proportional amounts. For example, we know caffeine has a causative effect on wakefulness. The more caffeine the average person consumes, the more wakeful they feel.

For causation to occur without correlation, we must therefore lack that mathematical relationship. How does such a thing happen?

A more insidious way to demonstrate causation without correlation is with manipulated samples. For example, we know there’s a causative effect between alcohol consumption and automotive fatalities. Drinking and driving – or operating a vehicle under the impairing influence of any substance – leads to fatalities. In a normal dataset, if we compared number of drinks consumed per day and vehicular fatality outcome, we’d see a clear correlation.

However, what if we restricted that dataset to just people who consumed 10 or more drinks per day? This is an example: 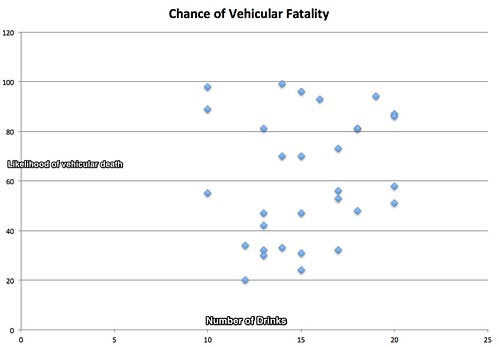 Even though we have a known causative relationship, we might not see a correlation because the chances of dying from all kinds of outcomes due to alcoholism interfere with the correlation. That much drinking per day will kill you for any number of reasons.

Why is this insidious? It’s possible to manipulate a dataset or a study to prove the outcome you want; in the above, we are using variation reduction to break correlation and take advantage of the fact that most people don’t understand causation can occur without correlation. If you were an unethical alcohol company, you might publish a study similar to the above to “prove” that drinking and driving isn’t bad. There’s no mathematical relationship in the highly distorted dataset above, and most people are so unversed in statistics that they can’t tell a good study from a bad one.

While the above is an extreme example, there are plenty of times marketers make this mistake. Any time you do a survey or study of your customers, you are automatically reducing variation. You’re not surveying people who are NOT your customers. While surveying only your customers makes a great deal of sense if you want to understand how customers feel about your products or services, surveying only your customers to get a sense of the industry can create the same distortions as the alcohol and drunk driving example above. You’re only “proving” that your data has insufficient variation, and that there may be a very obvious causal relationship that you’re missing entirely.

Causation can exist without correlation. Now that you know how it’s done, you can look out for it. Keep this in mind as you read through surveys, infographics, etc. There will be a great deal of “marketers believe X” or “marketers found X” headlines – but check to see how the survey was taken. If it’s a survey of customers or someone’s email list, question the daylights out of it before you go believing it.