Why We Can’t Easily Grow Unicorns

“77% of CEOs are complaining about the availability of key (usually technical) skills. Plenty of people are complaining about the lack of jobs. Maybe, just maybe, people need to bite the fear bullet and get trained on something highly technical that’s actually applicable to the work environment. I bet Christopher Penn has the hardest time filling roles at Shift, given his level of skill and needing the kinds of people who can do what he can do.”

It’s not fear, per se, that is the cause of the incongruity between the labor pool and the labor market. The incongruity is that the jobs people are hiring for just barely blinked into existence yesterday, the skills and training available for those jobs doesn’t exist at all, and the people who need work may not have the aptitudes we need.

When we dig into underemployment, we see the definitions of who this counts:

This is the pool of people Chris is asking about:

When we look at the data above, as technology has changed our world, the number of people who remain structurally unemployed continues to rise; the low point after the Great Recession (December 2016) is almost equal to the high point in the 2000s, and just shy of the high point in the 1990s. This is structural unemployment: the jobs lost aren’t coming back because technology has made those jobs obsolete.

Now consider who constitutes the labor force, which is civilians age 16 and older. The total civilian non-institutional population as of January 2017 is 254,082,000 people, excluding 2.2 million people in prison and 1.43 million in the military. That means roughly 25.4 million people are underemployed. That’s a lot of people.

However, consider what people like me need to hire for, and what the makeup of the underemployed labor force is. The underemployed labor force is made up of people lacking significant educational attainment. Consider the U-3 (only unemployed) rates for four levels of educational attainment and the number of people in each group:

There are, in short, 3 times as many people with an associates degree or less who are officially unemployed as those with a bachelor’s degree or higher. Now consider the skills that are most in demand, via LinkedIn: 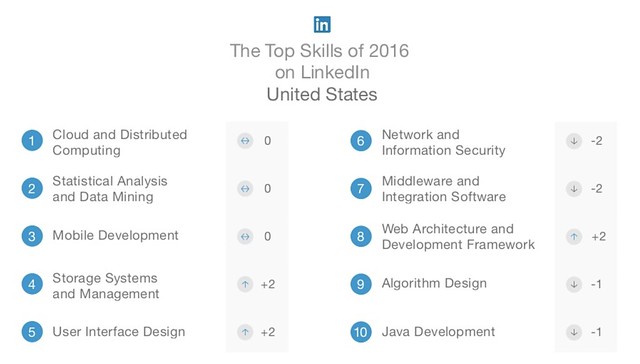 Not a single one of these skills requires no educational attainment. Every single skill requires significant learning and professional development; many require an advanced degree. No one is capable of walking off a manufacturing floor and into a chair at any firm for the above skills without extensive retraining – and by extensive, I mean 2-4 years of mental retraining.

Let’s add an additional layer of challenge atop this already complex puzzle. The skills shown above are the starting point for what’s hot in the business world. They are the table minimum. What’s of the highest value today are the skills that aren’t on the list yet because they’re not as obvious. Very often, they’re unique combinations of the above skills; someone who has UI/UX experience combined with data analysis skills is more valuable than someone who has a specialty in only one category.

As the joke goes, I am a better marketer than any programmer, and I am a better programmer than any marketer. However, the combination of those two skill sets makes me far more valuable than either just a marketer or just a programmer individually, because I can combine ideas from both worlds to make net new creations.

These blending of skills are what the most innovative companies are searching for today. We’re not looking for a stock Java programmer or a stock first-year statistician; outsourcing and machine learning technology can fill these needs relatively inexpensively and quickly. What can’t be filled nearly as easily are the true unicorns, those people who have developed competence or even mastery in multiple, linked disciplines and skills.

So, how do we make the best of this situation? How do we find the talent we need? We have to grow our own unicorns. We cannot rely on the labor market to supply them. We cannot expect individuals to take the initiative to grow skills on their own that they may not even know about.

What we must do is identify individuals who have aptitudes we seek, then train them on the specific skills. Virtually every marketing organization needs employees who are equal parts creative and analytical, who are as comfortable with a paintbrush or camera as they are a database. That’s a great starting point. Virtually every marketing organization needs people who are equal parts passionate and objective, people who can devote enormous energy towards a project while still being removed enough from it to find and fix bugs – especially their own.

Once we’ve assembled a team of people who have the appropriate inclinations, aptitudes, and enthusiasm, then we begin the long work of training them in the individual, specific skills they need to do their job well. This part is no different than any other profession; if someone has the right aptitudes, simultaneously teaching them Photoshop and Python isn’t a big deal. It may take years to do so, but it’s achievable.

Can the average worker with less than a bachelor’s degree be retrained? Yes, as long as they have the aptitudes and inclinations to learn. Therein lies the biggest problem we must solve if we are to re-employ 25 million people. Certainly a small percentage of them have these aptitudes and inclinations already, and will require little or no effort to convince them to pursue additional learning and education.

Where we will face a challenge is with the majority. Our educational system tends to beat out aptitudes like curiosity, a love of learning, and self-directed study at an early age, and has for decades. Before we can retrain people, before we can grow new unicorns, we must re-ignite that spark of curiosity in them.

Who might those people be? Look for people with multiple aptitudes: the ex-factory worker who builds things in his spare time AND plays an instrument in the local band. The single mother who still manages to write and publish while raising a child on her own. Look for the lifelong learners; we will find better candidates at the local library than the job fair. Look for the people who have unlocked and use more of their potential on average than the people around them.

How we address this problem, how we identify and grow unicorns, will define not only the success of our organizations, but the survival of our society at large in the coming decades. If we get it right, our mix of AI and humans will look like Star Trek: a future without poverty, in which everyone is free to develop their fullest human potential, while our machines handle our basic needs seamlessly. If we get it wrong, we end up with WALL-E at best, Elysium at worst.