What I Learned at World of Watson

At the beginning of this week, I detailed the things I wanted to learn while at IBM World of Watson. I hit a good chunk of my list; some stuff immediately dropped in importance as I learned more, expanded my domain knowledge more.

While I’ve summarized individual days of the conference here, here, and here, I wanted to share some bigger picture ideas that came from my experience at the event.

Cognitive Computing Is Here and Now

What does this mean for us? Opportunity and risk. If we push the envelope, if we develop on cognitive platforms today, we stand a very good chance of cornering our particular market or industry. First mover advantage in technology has always been strong, but with the ease of developing cognitive services, it’s stronger than ever.

The rate of innovation is accelerating. Take a look at how many more patents are issued each year:

This is what innovation looks like – and ubiquitous, inexpensive cognitive computing will only make this growth happen faster.

The Nature of Work Must Change

The second takeaway is that the nature of work must change. If we consider work to be either routine or non-routine, labor or cognitive, then we are at a crossroads.

Machines have been doing routine labor since the industrial era. The cotton gin vastly simplified the harvesting of cotton. However, machines have always required people to operate them, to provide the cognition behind them.

Machines have also done spectacularly poorly at simulating cognition, simulating thinking. Some may remember the hilariously clumsy chatbots of yesteryear, from Eliza to AOL automated assistants.

Having watched, interacted with, and worked with Watson at World of Watson, I am firmly convinced that machines are quite capable of many cognitive tasks, given enough training. For example, during the keynote, Dr. Satoru Miyano explained how Watson learned to diagnose cancer, by digesting thousands of articles, journals, publications, studies, and papers, then validating its findings against past cases. 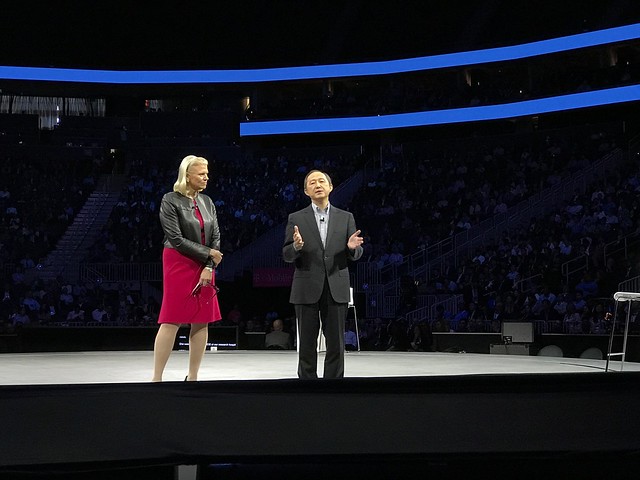 Watson became a smarter, better doctor than any human ever could be in the diagnosis of cancer because it can learn much faster than a human and find patterns in data that humans simply do not have the mental capacity to do.

IBM believes in augmented intelligence, in machines supplementing but not replacing humans. This is one area where I disagree strongly with their view of the future. Companies eager to increase profits and reduce costs will replace humans in every cost-effective manner possible. It’s not a failing of IBM; they live their core values strongly and this informs their view of the world. It’s simply reality that other companies don’t see their employees as anything more than disposable parts – and machines are better parts now.

We must have discussions about – and provide solutions for – a future when machines do most jobs better, faster, and cheaper than humans. The only jobs remaining will be ones where machines experience significant difficulty learning, or where it’s more cost effective to use a human than a machine. The most optimistic view is a paradise world where machines’ labor allows us all to explore our potential as humans, a Renaissance of art, music, and poetry. The least optimistic view is Elysium, a world where the wealthiest enjoy even more spectacular lifestyles, and a massive population struggles to get by.

Which we choose will be up to all of us, and in the next 5-10 years, those decisions will be made.

The Future is Now

The final thing I learned at World of Watson is that the future is now. We have a window of opportunity, personally and professionally, individually and as organizations, to ride this next wave of disruption to new heights. If lifelong learning isn’t a part of your life or company, change immediately. Change as though your life depended on it, because your livelihood does. Invest as much time and money in research and development, in training, in learning as you possibly can. Destroy your television. Convince your friends to learn with you rather than party without you.

The people who are most adaptive, most agile, most capable of learning will be the ones who not only survive in the new world, but thrive. I very much want you to be one of them.

IBM has paid for me to attend World of Watson and provide unbiased coverage of the event. They have not provided content for me to publish, but ask that I do publish during the event on blogs and social media in exchange for free admission and travel expenses. My thanks to the Watson Analytics team for inviting me.