Why We Need Citizen Analysts More Than Ever

Nothing sums up the most recent political environment in the United States as well as the phrase willful ignorance. We are, as a culture, willfully ignorant of data, of facts, of information. We know it is there, but we choose to ignore it.

For example, take this conversation Chris Brogan had on his Facebook profile about the legalization of marijuana. 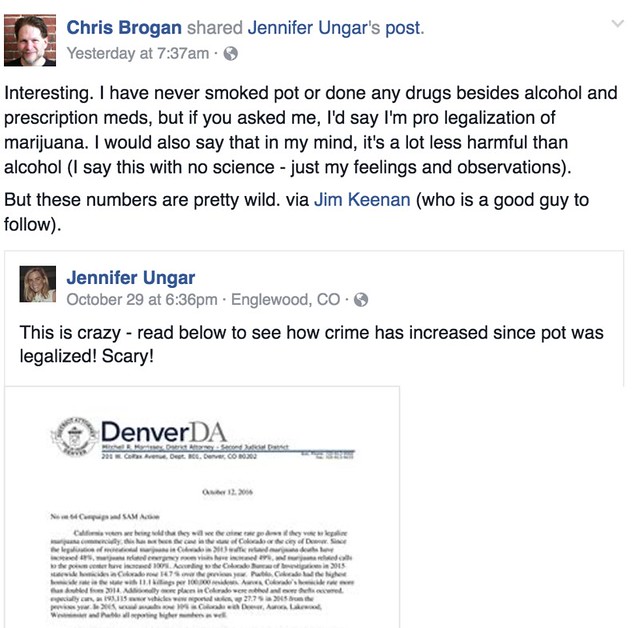 Look at the many, many people offering an opinion about the validity of the data.

Not a single person made an effort to validate the data for themselves. The original piece contained all the information we would need to hunt down the data ourselves; the National Incident Reporting Board is part of the FBI’s Uniform Crime Report (UCR). The UCR has its own reporting tool for data, aptly named the UCR Data Tool.

It would be a relatively straightforward matter to download the dataset in question, perform a regression analysis to determine which crimes are most correlated to marijuana sales and consumption, verify that the most crimes occur in places with the highest concentration of marijuana activity, and then test for interference by checking neighboring counties and states.

Has anyone done this in the conversation?

The general population would rather argue without data than go to the effort of validating the data shared.

This willful ignorance – a willingness to ignore the data, even though every effort has been made to make it available and accessible – is why the citizen analyst is more essential than ever. Citizen analysts would pick up this conversation and run with the data, validating it, then offering a fact-based refutation or acknowledgement of the original point. With this analysis would come an improvement in the quality of the debate, highlighting those whose viewpoints are swayed by new data (rational thinkers) and those whose viewpoints are chained to their ideologies.

Beware the latter. They’ll destroy everything they touch – a friendship, a community, a business, and a nation. Only a fool remains wedded to an idea after facing data which negates the idea.

We need you to reject incuriosity, bias, and willful ignorance. We need you to question, to be skeptical, to dig deeply into the causes you care about and find the truth buried within.

Our nation, our world needs you to step up, to become a citizen analyst.