Disclosure: IBM sponsored my attendance at their Analytics For All event. This post was written prior to the event.

I’ve written and spoken about IBM’s Watson (yes, the supercomputer that won Jeopardy) Analytics, and how it’s affordable Big Data analytics for marketers (for most small and medium businesses, $30 a month). IBM has upped the ante with its integration of Twitter hashtag analysis, which most social media marketers will find fascinating.

You begin by choosing Twitter as a data source: 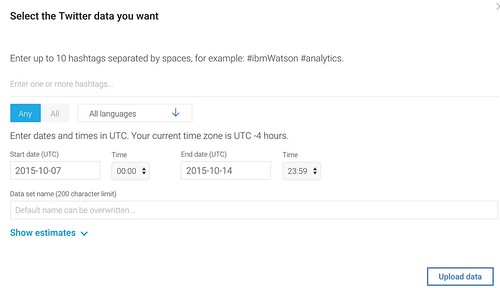 From there, you can use any of the modules Watson is known for. As I spoke recently at Social Media Success Summit, I decided to use that hashtag to explore potential queries:

For example, how does sentiment influence retweets?

Above, we see that Watson’s sentiment detection shows that no, sentiment doesn’t seem to influence retweets.

Is there a pattern in retweets by sentiment over time?

So what does drive retweets? We jump over to the prediction module to ask:

For the #SMSS15 hashtag, geography and follower count are what influence retweets most, albeit weakly.

Watson’s Twitter import has restrictions; for the basic account, you’re limited to 25,000 tweets at a time, so if you wanted to tackle something like the 2016 presidential election, you’d need to upgrade. However, for most marketers, Watson will do fine out of the box. Give it a try with the hashtags you care about!

Disclosure: IBM sponsored my attendance at their Analytics For All event by paying my travel and expenses to the event. This post was written prior to the event. Full disclosures including potential financial conflicts of interest here.