How to analyze all your 2014 tweets

Twitter’s Analytics tool has never been super forthcoming about all it can do. From its lackluster announcement of a stellar feature to non-obvious ways of getting at your data, it’s a goldmine without a map. As you start looking at the year’s marketing data, you might logically say, hey, can we analyze how we did on Twitter? From the default Analytics interface, the answer might appear to be no. Luckily, there’s a trick to get the answer you need.

First, log into Twitter Analytics by going to ads.twitter.com or analytics.twitter.com, depending on what your account is set up for (if you don’t see anything in one, try the other). Next, go to the Tweet Activity section: 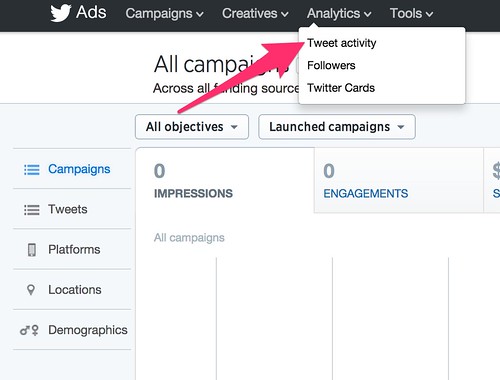 What you’ll see is the last 28 days of activity and some defaults to choose by month. We want none of that! Instead, use the calendar selector to manually go back to January 1, 2014: 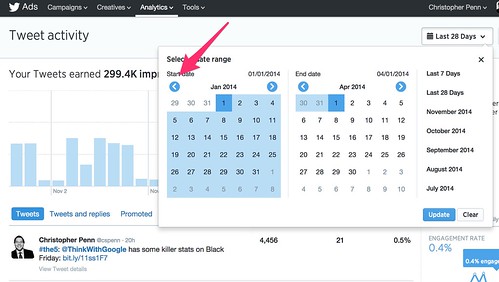 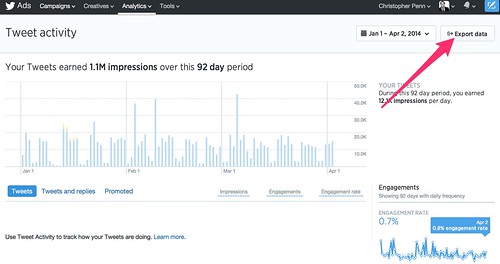 Wait for a bit as Twitter thinks about it, then spits out a CSV file. Suddenly, instead of having just the last 28 days of data to work with, you have all of calendar year 2014 and then some: 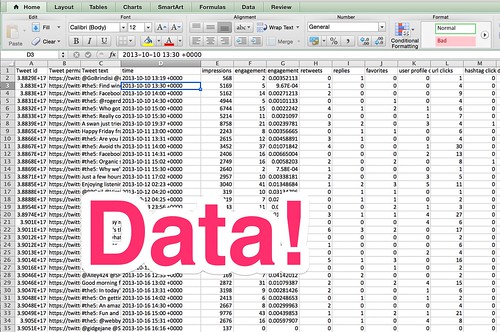 According to Twitter’s analytics team head, @buster, Twitter now spits out the last 3,000 or so tweets you’ve made and the stats on them:

@cspenn This has changed a bit. We now just give you as many Tweets as we can (last 3K or so) regardless of date range selected #MMchat

Now go apply any of the data analysis methods you’ve learned to the data, mix and mash it up with your web analytics, with your retail point of sale data, with anything else you want. You’re now in the driver’s seat when it comes to your 2014 Twitter data. For example, I did a very quick graph of impressions and saw this, a classic Pareto/powerlaw curve: 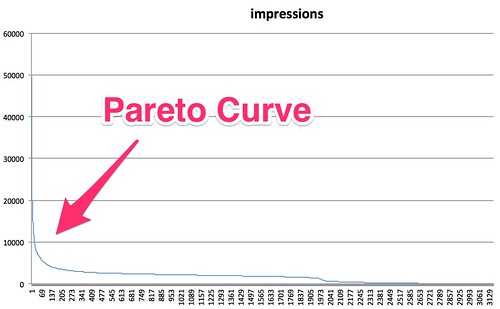 I also checked and found that the median number of times a tweet of mine is seen is roughly 2,000. That sounds like a lot until you consider that I have 78,000 followers, and suddenly it means the average reach of my tweets is about 2.5% of my total audience. Still better than my Facebook Page by an order of magnitude, but put in context, my email newsletter crushes any form of social media. If I was running my personal life and accounts like a business, I’d double down on email instead.

Give this hidden feature on Twitter a try with your own data and see how your 2014 went.