One of the most frequently asked questions I receive from clients, coworkers, and colleagues is whether Google+ is still relevant or important.

The short answer is that for SEO, anything Google tells you to do is important. It wouldn’t matter if Google+ had 5 users – if it impacts your SEO, it’s still important. But in the search for a slightly more fulfilling answer, I stumbled across an interesting find, GPlusData.com. It’s one of the many sites parsing Google’s G+ API and doing some basic reporting on the site. Take a look at new daily profile growth: 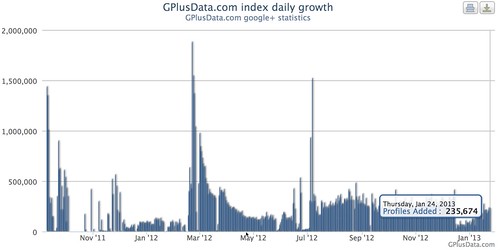 Yesterday, by their indexing, Google+ added 235,674 new profiles. That’s not insignificant; in any other world, 235,674 new customers or users in one day would be a cause for drunken revelry. Think about that number for a second. World of Warcraft, the most popular MMO on the planet, boasts about 10 million users after 8 years of operation. Google+ at its current growth rate would nail that number in 42 days.

Vic Gundotra, Google SVP, said back in December: “Today Google+ is the fastest-growing network thingy ever. More than 500 million people have upgraded, 235 million are active across Google (+1’ing apps in Google Play, hanging out in Gmail, connecting with friends in Search…), and 135 million are active in just the stream.”

“So how do you leverage Google+?” is usually the follow-on question. The answer is the same as it’s always been for every other social network: find interesting people and interact with them, share interesting things with people who interact with you. It’s not rocket surgery, but it is a lot of work. Join Communities, hit the Explore button a lot to find stuff worth sharing, circle people who have interesting stuff you like, hit the +1 button on pages you like on the web that offer it, etc. If you want more details, go grab any of these 3 Google+ books by Chris Brogan, Lynette Young, or Guy Kawasaki on the topic.

You ignore 235 million active users at your peril, especially since there’s a good chance at least some of your current or future customers are on board.