Yesterday we discussed iteration and its contribution to your success. Today, let’s take a look at automation. Automation is the most straightforward concept there is: any repeatable task with a predictable outcome can be automated. In many cases, it should be automated, and if you’re willing to pick up a basic scripting language on your computer, the digital marketing world is your oyster.

A quick story about automation. When I was in school, I got a job at AT&T (the original long distance provider, not the mobile company). Back then, AT&T was a gigantic megalithic corporation, and I worked in the Winbacks Division in the global headquarters. Imagine a slightly more nicely decorated Borg ship, and you get the idea – I was in 3F128C, which was building 3, floor F, room 128, pod C. The Winbacks group was focused around winning customers back from MCI and Sprint.

Every night, the Winbacks data analysts would print out close to 700 pages of Winbacks data from all over the country, every regional district, in this massive Excel spreadsheet. They would then courier the data (highly confidential, so it had to be manually carted, no inter-office mail) from building 1 to building 3 (not joking, a half mile walk) and it would eventually end up on my desk.

My job, for which I was paid nearly double minimum wage (a great thing back then in high school) was straightforward: I as the most junior person on the team had to leaf through all 700 pages and extract the Winbacks data, analyze it, and condense it down to 3 bullet points that would go on a Powerpoint slide, which was then submitted to the Director of Winbacks for her daily meeting with the AVP of Customer Acquisition. The entire process took about 7 hours.

After the first day of doing the job and realizing how incredibly stupid it was, I asked the Winbacks data team if they could just email me the spreadsheet instead. They said yes, since email back then was private and couldn’t leave the company’s network, and on day 2, they sent me the spreadsheet. I opened the Visual Basic editor, copied and pasted all of the locations of the Winback data throughout all 700 pages, and told the macro to add them all up and average them. The programming work took about 2 hours to do from top to bottom since I had to keep looking things up in the Visual Basic manual. (no Google back then)

After the second day of work, my job consisted of coming in at 9 AM, reporting to my supervisor, checking my email, grabbing that night’s spreadsheet, hitting the Play button on the macro, editing the Powerpoint slide 2 minutes later, and then going down to the company library to read for the other 7 hours and 45 minutes of the day. Believe it or not, that was an improvement all around for the company: they stopped burning 700 pages of paper a day, and the numbers were always accurately averaged.

Digital marketing is no different than this fairly amusing story. There are dozens, if not hundreds, of opportunities to automate every single day. Here’s one simple example: if you’re not familiar with WordPress short codes, they’re text snippets that the WordPress software automatically expands later. For example, in my blog, I end all my posts with {postsignature}. Inside WordPress, that expands to a huge block of text that looks like this: 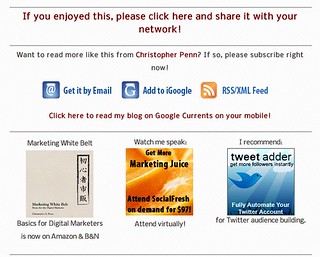 Instead of manually copying and pasting every day, that is now entirely automated. It’s a time saver for a repeatable process with a predictable outcome. This is programmable with the WordPress plugin Shortcode Exec PHP.

Here’s another example – I took the concept of short codes and started using them in my newsletter. 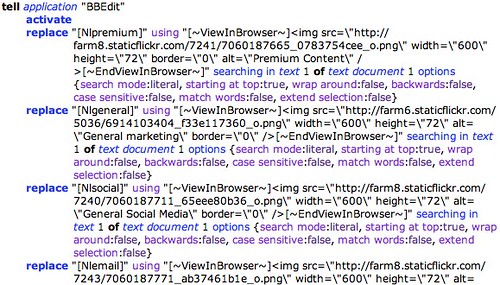 When I’m editing it in my text editor, I just put in a code like {nlsocial} and then in an automated cleanup AppleScript script I run on the HTML, it inserts this where the short code was:

Thus, I never have to worry about formatting all of the section headings in my newsletter correctly. I do it once, the script does it every issue afterwards.

Here’s a third example, also from my newsletter:

This allows me to send just one email each week. The automation inside shows different content for premium content members and non-premium content members, but instead of creating multiple editions of my newsletter and pressing send (and possibly screwing up) multiple times, I write once and send once, letting the software do the rest.

I know what you’re saying, that this is reserved for the super geeks. It’s not. If you’re willing to commit a little bit of time, say maybe an hour a week or less, to learning a basic scripting language, you’ll be automating things left and right within a couple of months and wondering how you ever managed to get anything done beforehand. My recommendation for new users to the world of scripting languages would be AppleScript (with Automator) on the Mac and Visual Studio Express on the PC. If you’re a bit more ambitious, look at Perl.

Even 100% non-technical folks can get in on the automation train. Look at apps like Typinator (Mac) or Texter (Windows). These are text substitution apps, in which you program in your own short codes and the app will automatically expand that text to a predefined text block. For example, I might type [emailsig] and Typinator will automatically replace that with:

That’s a heck of a lot of copy/pasting or manual typing I don’t have to do.

If you really want to get more juice for each squeeze, combine automation with iteration. Automate a task and then keep revisiting it regularly to improve it, to fine tune it, to make it go faster or do more.

Here’s your homework. Keep a list of the digital marketing tasks that you do today and over the next few days and determine if they are repeatable tasks with predictable outcomes. Put aside your ability to do technical things for the moment and just identify how many things you do on a daily basis that are repeatable and predictable. Then figure out how much time each of those tasks consumes. If at the end of this week you find that you’re spending 10% or more of your time each day on repeatable, predictable tasks, then that’s the place to start thinking about whether automating those tasks (or even just a part of them) is possible and practical.