There are two concepts that can be the building blocks of massive success in digital marketing, if you have the awareness and willingness to integrate them into your practices: iterate and automate. Today we’ll be discussing iteration; tomorrow, automation.

Iterate means to repeat a process, but to do so making improvements along the way. If you begin with the assumption that there is no such thing as “success” or “finished”, you clear the way for iteration, for continuous tweaks and improvements. As you know, I publish a personal newsletter on a regular basis. When I first started doing a newsletter, it was mostly just updates about what was going on with me (example). That wasn’t terribly helpful, so the first iteration was to improve on its value.

The next major iteration after adding some actual content besides a list of where I was speaking was to enforce a rigid production schedule. Personal newsletters had always fallen on the list of “I’ll get around to it”. That changed in the summer of 2010 when I made a commitment and created a calendar of publication dates. Once I found a repeatable recipe for the content, I improved on the newsletter’s frequency to weekly in the fall of 2011.

Along the way, I also found a great template that I really liked and used that once I switched to the weekly process. Things were relatively streamlined, working well, and the response I got was generally positive. At this point it’d be easy to say, “newsletter successful, the process is built and baked, we’re done, let’s just keep going with what’s working”.

Except that there was one little detail – people liked the newsletter, but didn’t love it. When I asked trusted friends about it, they said yes, that the information was valuable but disorganized – signs that it was time for another iteration, another wave of asking for feedback and making improvements:

I took my wonderfully tuned process and shattered it to develop a completely different process this past over the last month, creating an entirely new system filled with bugs and flaws, but structurally sound, and now it’s a question of iterating to improve it, taking feedback each week from readers and making changes as needed: 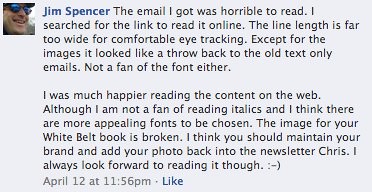 Eventually, if you’re patient enough and willing enough to make changes, your iterations pay off: 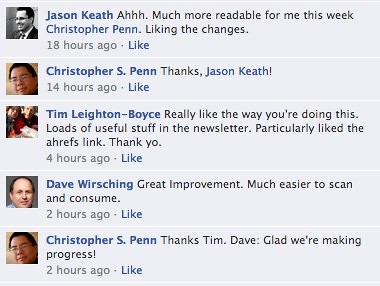 Here’s the hardest part of iteration: you have to be willing and ready to say to yourself that you’re wrong, that you’re doing it wrong, that things aren’t as good as they could be. You have to be willing to let your ego take some serious body blows, especially if you’re a veteran practitioner. The voice in your head that says, “I’ve been doing marketing for X years, I know what I’m doing” has to take a back seat to what your customers’ voices are saying, and that can be tough to swallow.

Once you get over that internal hurdle, once you are willing to take the leap and throw away something that’s working “good enough” in order to make something that’s better, the rest of the process is simply doing, revising, and listening again.

Tomorrow, we tackle automation as a core facet of iteration.