Are you getting the biggest bang out of your social media efforts?

If you’re not reinforcing it, then I’d hazard a guess that you aren’t.

What am I talking about? Reinforcement is a mechanism, a set of processes, to help increase the value, reach, and power of your social media efforts. Let’s assume that you’re doing the generally right things – creating content of value, reaching out to interested people, and engaging your audience in conversation. If you do those well, then your social media efforts are likely already successful or on their way to being successful. Congratulations are in order because so many don’t do those well.

However, because of its scale and nature, attention via social media is incredibly transient. Social sharing service Bit.ly made the claim back in September of 2011 that the average lifespan of a link is somewhere around 3 hours. That’s a fairly small window of attention, which means that if you’re doing social media marketing, you would need to be generating new attractors of attention every 3 hours.

That’s where reinforcement comes into play. Rather than have to come up with something new and brilliant every 3 hours (my hat is off to you if you can), you can approach your channels with reinforcement methods. Let’s look at 3 of them.

Applications like Argyle Social and Buffer are the kings of in-channel reinforcement. Don’t just use them for mindless spamming of the 8,472 random things you just read in Google Reader, though. Be a little thoughtful and scientific about their usage.

Look at your friend activity graph on Crowdbooster and reinforce your most valuable shared items at those time periods in-channel. For example, you’ll notice I frequently post on Twitter my day’s blog post with a “For the evening crowd…” tweet right around 8 PM, which is the peak of post-work activity.

By reinforcing in-channel, I am able to extend the life of the material I’m creating or curating.

To this end, I reinforce by going cross-channel. To give you an idea of workflow, I collate all of the stuff that I think is worth sharing for the day in Evernote, then format it for Twitter. That’s where I post #the5. I then create a separate version of the same material with added commentary or opinion for Google+ and Facebook if appropriate. 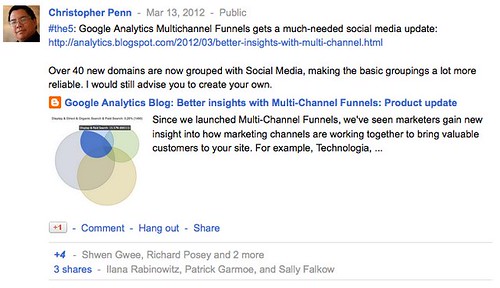 By reinforcing material cross-channel, I reach different crowds of people. Some items that are popular and retweeted like crazy on Twitter are totally ignored on LinkedIn and vice-versa.

The final piece of reinforcement that I find effective is out of channel, where I use non-social methods to reinforce social media. Here’s a fun stat: 50% of the traffic I get out of my social media marketing efforts comes from non-social channels. 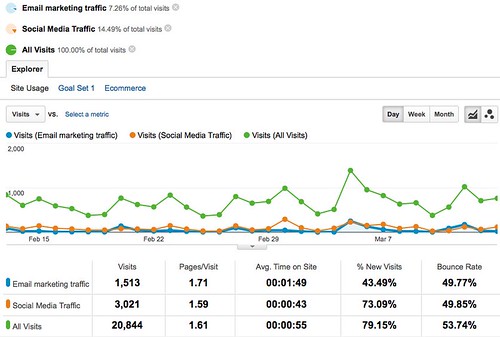 How does that work? Simple: by collating all of the stuff I intend to share that day in Evernote, I have a repository at the end of the week that I can then reformat and place in my weekly newsletter. That gives added new life to the things that I’m trying to share, and in many cases things that got missed during the week’s activities get found and seen in the email wrap-up. Daniel Johnson Jr. wrote to me recently to say this about the newsletter:

“This wasn’t Almost Timely… it was definitely timely!!! It’s hard to keep up with posts throughout the week, so I appreciate that you compile the best stuff to include here.”

It’s difficult to overstate the importance of Daniel’s comment. When your content gets noticed, it has a 3 hour shelf life. When your content doesn’t get noticed, it has no life at all. Reinforcing with channels like email marketing can get it in front of people who missed it the first few times around, because email is a fundamentally different set of behaviors than social media channels.

If you’re not reinforcing your content, there’s a good chance it’s not getting the attention it deserves because we’re all so distracted, trying to pay attention to many channels at once. Think about how you could give it some extra life by reinforcing it, then go try it out.