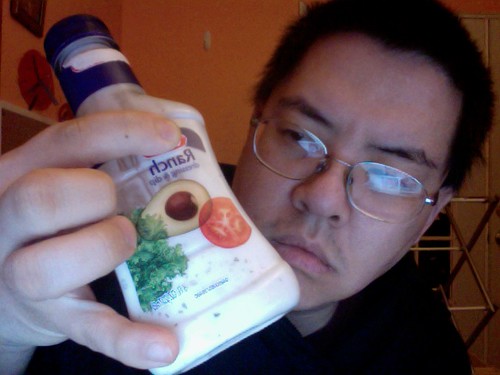 Have you ever wondered what the heck ranch dressing is? I have. It’s very tasty stuff, making almost anything better. According to Wikipedia, it was first invented in 1954 by the Henson family at their dude ranch, the Hidden Valley Ranch. Eventually, it became so popular that in 1972, it was bought by Clorox (yes, the bleach maker) and made commercially available. Internet-savvy cooks have managed to replicate the original recipe as follows:

Ranch dressing is known for its ability to make just about anything taste better. Salad, snacks, baked potatoes, you name it, ranch dressing can probably improve it, which is why it overtook Italian dressing in 1992 as the best-selling salad dressing in the world.

It’s also known for being hideously bad for you in larger quantities, since 2 tablespoons clock in at about 145 calories, 94% of which is fat.

Finally, Clorox had to work some scary chemical magic to make it shelf-stable, since so much of the recipe is dairy-based and would otherwise spoil within days of making it. Take a look at your generally available commercial bottle of dressing and you’ll find antifungal drugs like natamycin in it. This is why it’s generally a better idea to copy the recipe above and make it at home when needed.

You can (though you shouldn’t) put ranch dressing on things like piles of paper shreddings. Again, it’ll be barely edible, but the dressing will manage to help you overcome what is otherwise something you wouldn’t eat.

So what does a very tasty salad dressing have to do with social media? In many ways, social media is just like ranch dressing:

1. You have to do a lot of crazy things to it if you’re not making it fresh yourself. The end product is okay, but not nearly as good (or good for you) as when you do it yourself.

2. It will improve just about any product or service to some degree to make it more palatable.

Enjoy the salad and the social media!