Influence and the Ninja Long View

If there’s one thing the jonin (heads of ninja families) had in spades, it was the long view, the perspective that spanned more than just now or the next battle, but the next decade or two. The most successful jonin leaders made decisions that might have seemed counterintuitive or foolish in the short term but paid substantial rewards in the very long term. In one of Stephen K. Hayes’ groundbreaking works on the topic, he mentioned that jonin leaders would often try to get field agents into positions of power decades in advance so that they would be ideally placed and free of any suspicion when needs arose.

This is exactly the opposite of most models of influence today. Today, we look for Klout scores or follower counts to tell us who is influential in the here and now. Today, we try to recruit for marketing campaigns in the moment, hitting our mailing lists as furiously as possible, all the while wishing we could spam just this once.

Understandably, our circumstances dictate this to a degree. Shareholders demand quarterly profits or they sell off the stock and the board of directors cleans house. Companies hire and fire with the mercurial temperament of a 6 year old having a tantrum as soon as profits slip. Having a mindset that is only in the here and now, in the “just survive another day”, is perfectly understandable, but can be disastrous for you in the long term, because you’ll never have the power or capability to grow beyond your current circumstances.

Let me give you an example of where influence and the short term falls down. If this were a biography of someone that you were considering to include in a marketing campaign, would you use them? 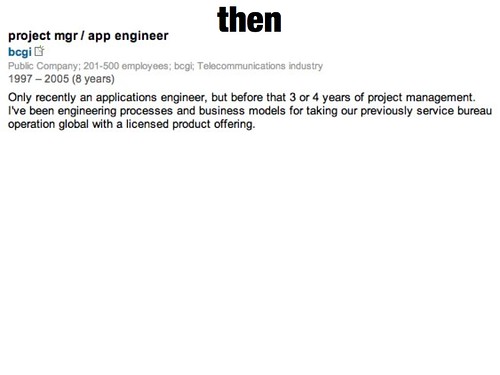 Chances are, your average marketing specialist seeking the biggest influencers would pass this person by. Boring. Uninteresting. No influence. Low Klout score or non-existent Klout score. If you would have made the same choice, you would have missed out on this: 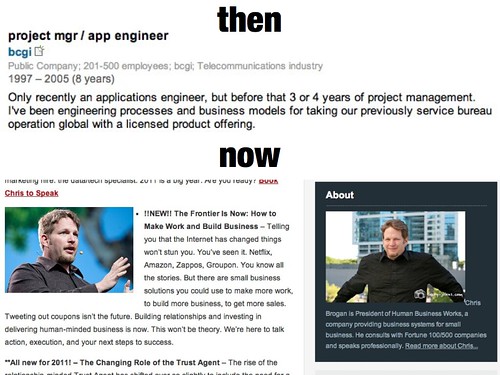 Yes, that’s Chris Brogan, from right around the first PodCamp and today. If you take the long view, building out a network for the very long term, there’s a good chance that some of the people who are nobodies today will be chart toppers down the road. The thing is, you can’t accurately predict this because change happens so dramatically and so rapidly now.

Here’s a second example. This past week I threw a free webinar on social media job search. In terms of influence, job seekers are probably at the bottom of the pile because they have none of what most marketers want in the short term. But if what I shared is helpful and allows some of those folks to get jobs, then do I have seeds planted for the long term? You bet.

Do you need to be paying attention to what we call influence now in the short term, with outreach campaigns and their like? Of course. But alongside the short term, in order to be seeding your success for the future, you need to embrace and begin taking the long view, too. Here are a couple of things you can and should be doing to build for the long term:

1. When networking online for the long term, ignore influence measures entirely. As long as someone is in the same field as you, accept them into your network and treat them civilly and professionally. You don’t have to be their best friend or drinking buddy, but you shouldn’t be a jackass either. Today’s intern is tomorrow’s marketing director.

2. Build up your database and mailing list. I don’t do a personal newsletter purely for the entertainment value. I do it to stay in touch with people and stay present of mind, and I’m always working on building and growing it every day. It’s an incredible long term asset and after 5 years of constantly growing it, it’s at a size where I can make it useful. The plan for the next 5 years? Keep on growing it.

Neither of these long term actions should in any way impede the short term work that you have to do now to keep the lights on. Include it into your marketing rotation until it’s second nature and when a need arises years down the road, you’ll be pleasantly surprised at how powerful you can be in addressing it. That’s the ninja long view.