Over the weekend, I enjoyed leveling my new hunter in World of Warcraft and learning more about the class. It’s quite a lot of fun. One of the things that occurred to me as I was leveling, however, was that hunters, like all of the other classes in World of Warcraft have the exact same buttons to push from one hunter to the next. 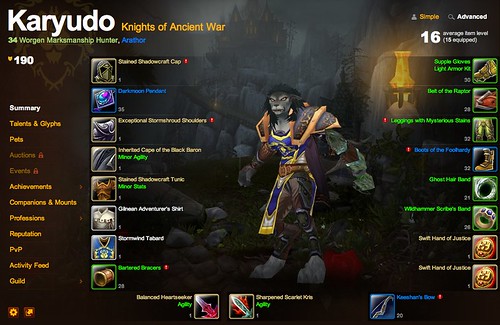 That led me to the question of, well, what makes a good hunter then, if my Concussive Shot is no different than anyone else’s? The other two areas you hear about in the game besides abilities are gear and skill. Gear, of course, is the equipment that characters wear and use, like armor and weapons.

Of the two, the one you hear the most about from other players is gear:

The reality is, however, that better gear doesn’t make the player significantly better after the basics are covered. Using the correct abilities at the correct times against the correct enemies is what defines the top players of the game. One popular figure in the Warcraft community, Gevlon, actually created a special team of people who had intentionally low quality gear and then went and killed the biggest, baddest enemies in the game to prove that skill matters more than gear.

What does this have to do with anything marketing related? Let’s think about this for a second. We have pretty much the same “buttons” to push in marketing, don’t we? We can tweet, post to Facebook, blog, podcast, etc. – all of the basic tactics that are common to us as digital marketers. That means that the areas where you’ll differentiate yourself are in the marketing equivalents of gear and skill – tools and strategy.

What’s the first thing you hear from marketers everywhere? You guessed it – we need more tools, better tools, what are the new tools to be using, who’s got the best tools? Marketers are asking about their gear equivalent, instead of how to become better marketers with the tools and tactics they already have.

So how do you change? How do you grow? First, recognize that both in Warcraft and in marketing, focusing on tools and tactics or gear and abilities has very rapidly diminishing returns. Once you have the basics in place, there’s not much point in chasing down minor percentage increases that come from different tools, and the costs scale exponentially.

Second, recognize that skill development is paramount after the basics. You need to be out in the field, out testing, out questing, out learning your class, out learning your market as much as possible in order to develop and grow your skills. In Warcraft, there are these target dummies in every city in the game. They do nothing except let you test your basic abilities and skills to achieve maximum results. Marketers don’t necessarily have target dummies to test on, but we can and should be testing all the time in our work to find out what’s working, what combinations of tools and tactics deliver for us.