How do you come up with new ideas? Brand new ideas can be difficult to pull out of thin air, but there are plenty of ways to examine things that will bring out new combinations. For example, we’ve had flour, water, tomatoes, and cheese for centuries, but modern pizza is a relatively new invention (1899), a combination of existing ingredients. 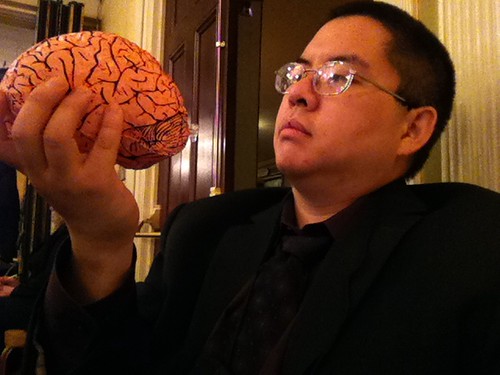 The same applies to forms of marketing, and really to any discipline or field of study. For example, suppose you took 3 different ideas and tried to think up some way for them to work together, such as display ads, social media, and Gestalt theory of visual perception. Each discipline has ideas about how things are supposed to work, but when you put them together, you might get something completely unforeseen.

Once you’ve identified your 3 areas, figure out what they have in common. In this example, the logical commonality is us, the human being. What we see (and how we see it) can in turn create interaction. Display advertising can be the vehicle by which we see things, the way things are presented to us. Suppose you had an advertisement that went beyond simple branding or an offer and became a visual puzzle to solve, something that intentionally violated Gestalt theory. Suppose that puzzle required interaction with other people – gathering up your friends to solve it socially, a puzzle that required collaboration.

Now the possibilities start to pop. What would that puzzle look like? How would you create it, build it, and distribute it? I’ve no idea what such a thing would look like, but I’ve now got a basis for creating something, a starting point for a project that could be innovative. Like many things, once you get started, once you get a little momentum, it’s easier to keep things moving forward. Think of this as innovation mad libs.

Let’s pick a few more random examples out of thin air that could be the foundation for blog posts, products, services, maybe even the Next Big Thing.

What kinds of products, services, posts, rants, etc. could you come up with for each of these?

Expand this kind of thinking to other areas, to other ways of looking at the world, and you might be surprised at how many untapped innovations have been waiting for you right under your nose.