About a month ago, Bryce Moore mentioned that he had gotten some good site speed improvements from Cloudflare, and recommended it. Being one of the smartest people I know, I trusted his recommendation and blindly installed it on my web site. The results have been spectacular. 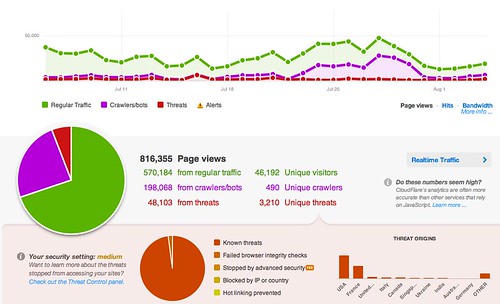 First, Cloudflare is a caching service. I call it the poor man’s Akamai, because it caches and distributes your site content so that you are less likely to get Slashdotted. In this respect, it’s actually quite similar to Google’s Page Speed Service which was just announced. Cloudflare’s caching service does a nice job of turning around pages really fast, about 60% faster than the site itself, based on their metrics and a few pokes and prods from my testing tools.

The key difference with Cloudflare that I very much appreciate is its transparent interception of security threats. It intercepts them at the DNS level so that hostile bots, hacks, etc. never physically reach your web site, which, given the recent spate of WordPress-related security issues, is a wonderful thing.

Setting it up is not easy. You have to know your way around DNS some, either through your DNS provider (whoever you bought your domain name from) or if you run your own DNS server, how to administer it competently. After you’ve done DNS configuration, you do need to install the WordPress plugin so that the service and the plugin communicate with each other, but that’s relatively straightforward. If you have any bizarre DNS settings, be sure to verify that they’ll work with Cloudflare before you switch over or you risk blowing up your site. For example, if you’re a company that uses the non-www version of your URL to go someplace different than the www version, blindly clicking OK on the Cloudflare install wizard is likely to force one of your two sites to simply vanish.

Could Cloudflare make the process easier? Not really, no. It’s one of those things that there is no version of brainlessly easy for, and that’s okay. It’s not for everyone, but for those willing to learn and experiment (and screw up), Cloudflare delivers the goods as promised.

I haven’t tried any of the pro version paid services. The free version does everything I expected it to.

Should you try it? If you’re technically adept enough to, yes. If you don’t feel confident monkeying around with DNS, then I would strenuously urge you to find the nearest geek, bribe them with beer, and have them do it for you.

Full disclosure: Cloudflare hasn’t given me any compensation or perks for this writeup as of the time of writing. That said, I wouldn’t say no if they offered.