When it comes to learning data science, one of the challenges we face is just how seemingly daunting the field is to learn. There are so many techniques, tactics, and strategies that it’s difficult to know where to start.

Learning something new always begins with an understanding of the basics. From martial arts to dance to data science, the basics form the underpinnings of everything that comes after. We can’t do a black belt technique with proficiency if we don’t have all the time, experience, and knowledge that comes from the belts before black belt.

With data science, the same thing is true. We have to learn the basics, the techniques, first. So how do we do that?

Our first exploration has to be cataloging our knowledge. What do we know? For this, I use the Rumsfeld Matrix, coined by former Secretary of Defense Donald Rumsfeld. Rumsfeld opined in a press conference years ago that “Reports that say that something hasn’t happened are always interesting to me, because as we know, there are known knowns; there are things we know we know. We also know there are known unknowns; that is to say we know there are some things we do not know. But there are also unknown unknowns—the ones we don’t know we don’t know.”

If we extrapolate this snippet of speech to a 2×2 matrix, we arrive at: What does this have to do with data science techniques? When we look at the entirety of data science, chances are our knowledge falls into one of these four categories.

For example, we know that we know linear regression.

We may know that we know logistic regression, but we also might have learned that in college many years ago and forgotten it, which would put it in the category of unknown knowns.

We know we don’t know how to do, say, GLM modeling, which would be in the category of known unknowns.

And there are a whole slew of techniques we may never have heard of. We don’t know that we don’t know them, because we’re unaware of teir very existence.

When it comes to learning data science, the categories we need to conquer quickly, in terms of cataloging, are the unknown knowns and unknown unknowns. Without understanding these two buckets, we might think we’ve got the hang of data science, but our skills are limited by what we don’t know we don’t know.

So, how would we come to know what we don’t know?

This is where IBM Watson Studio Modeler comes in handy. When we first log into Watson Studio and set up a new Modeler environment (which is functionally almost identical to SPSS Modeler, for those who know that particular piece of software), we’re presented with a deceptively simple menu of tools: 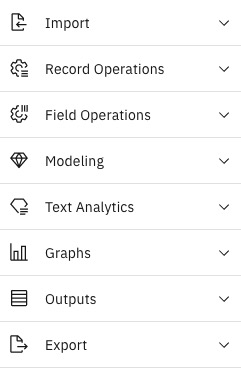 Boy, that sure looks easy, doesn’t it? This data science thing is going to be a cinch.

Until we start to expand the menus. Here’s what all the menus look like, opened up: Woof. That’s a lot of buttons.

But now, do you see the value of this tool? It’s not just an environment for working in data science. It’s also a map of data science techniques, the most common techniques, all laid out neatly in order of operations:

That’s a very handy little data science lifecycle right there. And each menu has a plethora of techniques we could bring to bear on any given data science problem.

Guess what this massive set of menus is? Yep – it’s the map you need to eliminate your unknown unknowns. When you look at this list, how many are techniques you’ve never even heard of, or have no idea what they mean? I remember the first time I logged into the interface and saw a widget for CHAID – and had no idea what that stood for (chi-square automatic interaction detection).

When you have a catalog like this, neatly laid out, it becomes trivial to solve the unknown unknowns. You’ve changed them all into things you know you don’t know. You’re aware of their existence, and you’re now able to build a plan for learning what you don’t know. Your plan might be as simple as Googling each of the techniques, then exploring and playing with the widgets in IBM Watson Studio Modeler, since it’s a no-code environment that allows you to try things out fairly quickly.

I usually go with a four-part analysis of techniques I don’t know:

For example, the CHAID technique was something I was unfamiliar with the first time I logged into Watson Studio years ago.

What is it? It’s a decision tree algorithm used to determine if two sets of categorical variables are substantially different than each other with regard to an outcome.

Why would you use it? If you have two different groups of people – say, people who saw a billboard and people who didn’t (and whether they bought something) – and you have characteristics of each that are non-numeric, such as gender or ZIP code, you could use CHAID to see whether or not the billboard had an impact, or whether other variables explain that they bought something or didn’t.

When wouldn’t you use it? CHAID builds a classification decision tree, but if a good chunk of your data is numeric instead, you’d probably want to use a different technique like CART or other regression-based techniques.

How is it used? This is where the IBM Watson Studio interface comes in handy. Because it’s a no-code, drag-and-drop interface, you just plop the CHAID widget into your workflow and you’re off to the races.

Going through this catalog of techniques will take time – weeks, easily, if not months. But that’s all right, because we are less concerned about being blindsided by the unknown unknowns. We’ve got them fairly well fleshed out now, thanks to IBM Watson Studio Modeler’s interface and catalog.

This learning technique doesn’t just apply to IBM Watson Studio Modeler. Every piece of commercial software that’s good at what it does has the same potential, from Google Analytics to your CRM to even your word processor. What do all the features do? How applicable are they to your business, your industry? What do you know? What don’t you know?

Apply it to every piece of software you use, and you’ll extract maximum value from your tools.