As is customary at the start of each quarter, I like to look at macroeconomic indicators to see how things are going. What’s the market like? For B2B marketers, what will the impact be to our budgets? For B2C marketers, how is the consumer that powers our businesses faring? Let’s dig in. 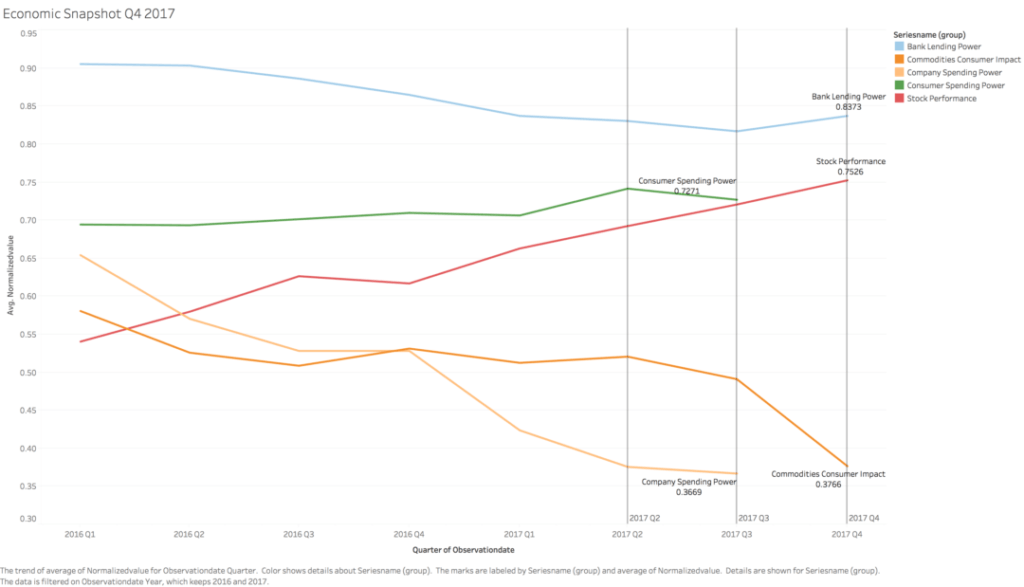 As we enter Q4, we see something of a mixed bag. Let’s tackle the meaning of each series.

Bank Lending Power: This series is composed of various indices that revolve around lending. How easy is it for banks to lend money? How favorable are the economic conditions? We see that lending conditions improved slightly since the start of Q4; in Q3 they were weaker, meaning it was riskier for banks to lend.

Stock Performance: This series is composed of the Fortune 10 plus NASDAQ aggregate, S&P 500, and Dow Jones Industrial Average. Overall, stocks have had a spectacular year.

Consumer Spending Power: This series is composed of Federal Reserve economic indicators like disposable income and median wages. We see consumer spending power took a dip between Q2 and Q3, indicating the consumer doesn’t have as much money to play with.

Company Spending Power: This series is composed of indicators like BDI, the Baltic Dry Index (a measure of shipping prices) and the Producer Price Index. In 2017 thus far, company spending power continues to fall, indicating companies are spending less and willing to spend less.

Commodities Consumer Impact: This series is composed of indicators like gold, rice, gasoline, wheat, etc. The actual prices are inverted; the higher a price is, the more it negatively impacts the consumer, so the lower the score. What we see is that commodities prices have been negatively affecting consumers all year, but impacts have increased substantially in Q3.

What Does This Economic Snapshot Mean for Marketers?

Despite a high-flying stock market, with commodities putting a dent in consumers’ wallets, expect the Q4 retail season to be weaker than expected. Marketers for consumer brands will be in a knife fight for more scarce consumer dollars, so be sure your marketing is firing on all cylinders. Beat competitors to the punch – whoever gets to the wallet first, wins.

For B2B marketers, the headwinds you’ve faced all year are only going to get stronger. There’s a fundamental disconnect between what’s happening in the stock market and actual company performance. With a weaker consumer, the impact up the food chain will be more pronounced – expect a softer Q4 and possibly a weak 2018. Batten down the hatches, close whatever you can in your pipeline, and double down on retaining your best customers by any means necessary.