The most innovative marketers routinely pick up new things, try them out, and succeed or fail. Why are marketers struggling so much to adapt to artificial intelligence and machine learning? In this series, we’ll explore machine learning and artificial intelligence to build a foundation for understanding the field – and how it applies to marketing.

In the last post, we looked at the basics of machine learning and the two types that exist. Within each type, there are dozens if not hundreds of different techniques for machine learning. Each of them is based on a statistical or mathematical principle that makes them effective in certain circumstances. One of the most difficult challenges in machine learning in artificial intelligence is knowing which techniques to use and when.

Imagine an individual technique in machine learning as a single piece of a toy train set, a single piece of rail. That’s not very much fun, but it’s better than nothing. Now imagine a box full of toy train track pieces. That’s much more fun; we can build all sorts of interesting set ups for our trains to ride on. 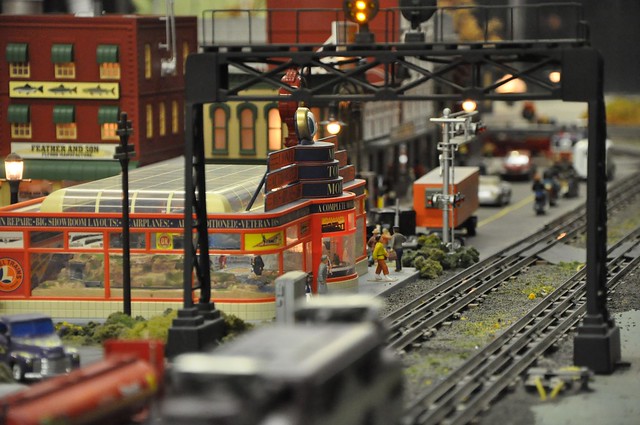 A neural network is the connection of different machine learning techniques together in a linear path, like the toy train tracks pieced together. We tie together different techniques in a reasonably linear path applying different forms of statistics and mathematics, until we achieve the result we want.

Artificial neural networks get their name from the fact that they resemble the way the human brain works, with many different pieces talking to each other and pathways from one piece to the next.

To extend the model train analogy, imagine now taking a large toy train set and combining it with many other toy train sets, connecting one train network to the next. How far could our little toy train go if it had miles of tracks from different train networks to run on?

This is effectively what deep learning is, the extension of neural networks to such deep complexity that not only do they simulate the architecture of the human brain, but can replicate many of its abilities. The most famous deep learning implementation currently is Google’s DeepMind; this year, it beat several world Go champions, a feat that many did not expect a computer to be able to do for years, if not decades.

What applications do deep learning have in marketing? None currently, because no marketing tools are sufficiently developed to use deep learning as of this writing. However, the ability for a machine to learn quickly without explicit programming for many tasks holds great promise for marketing. True natural language generation from scratch would be one such application; imagine never having to compose an email again or write a blog post. Want a new best-selling book? A sufficiently advanced deep learning machine intelligence could write one for us.

If we think back to the hierarchy of analytics, after prescriptive analytics comes the fifth and most promising stage: Proactive analytics, when machines read the data, performing analysis, develop insights, and execute a plan without our input. Deep learning will power proactive analytics.

Here, from the Harvard University Center on the Developing Child, is a diagram of how human brains evolve from birth: 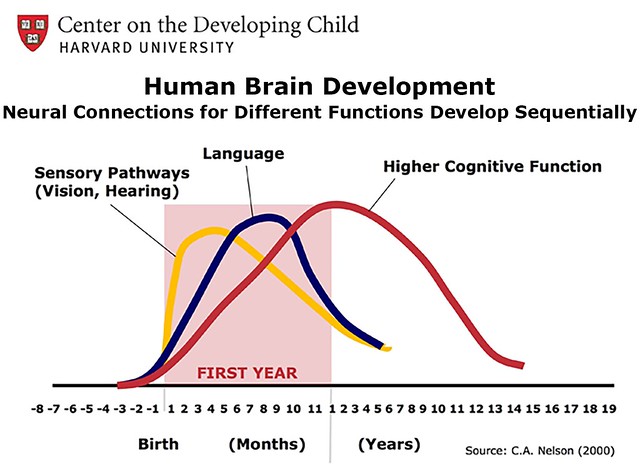 In our first year of life, we begin to learn how to process sensory data. We see, we here, we feel, and we build an understanding of the world at a rudimentary level based on our sensory inputs.

As our brains grow in complexity, we develop language skills and ability to communicate by putting together abstract concepts – words – with their real-world representations.

Let’s rearrange this diagram for machines: 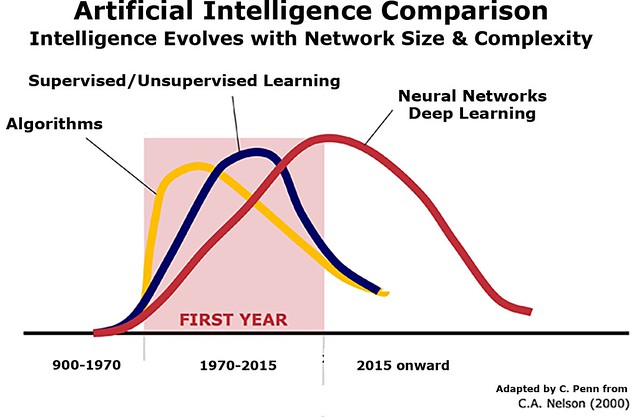 Equivalent to basic sensory processing and inputs is the algorithm, the building block of machine learning. If x happens, y is the consequence.

The equivalent to learning language the various forms of machine learning, supervised and unsupervised. This is where our machines learn without being explicitly programmed to do a task.

There’s one final evolution of machines that is implicit in the human being: Sentience. Futurist Ray Kurzweil calls this the Singularity, the point at which we develop an artificial intelligence that is not only not purpose-built, but is a general-purpose artificial intelligence, a sentient being that can think and reason on its own and function as an independent entity.

How far off the singularity is continues to change; originally, futurists believed we would achieve a sentient artificial intelligence by the year 2100. That time frame has been drastically shortened; Kurzweil believes it may be as soon as 10 years away.

Until we reach the singularity, the implications of artificial intelligence on marketing are mostly positive. Many of the tasks we perform as marketers are highly repetitive, not particularly engaging, and require very little creativity, such as creating reports, deploying campaigns, writing content, etc.

As machine learning continues to evolve, we will outsource more and more of these rote tasks to our machines, freeing us up to use our own higher cognitive functions to better effect. We will achieve better results in marketing campaigns with our machine companions; testing, optimization, and analysis will be easier and more effective.

In the next post in the series, we’ll look at marketing applications of artificial intelligence in production today. Stay tuned!

The AI Primer for Marketers Series

Be sure to catch my keynote talk about this topic as well.