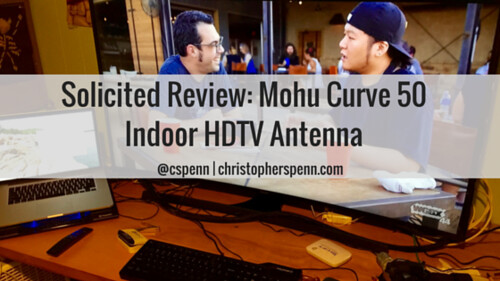 During Prime Day, I saw a deal I couldn’t pass up: the Samsung 55" 4K curved TV. I love 4K TVs as second monitors for my laptop. The amount of real estate and high DPI means you can have a dozen windows open at the same time and not feel cramped.

I don’t watch much TV other than CW’s The Flash, but it’s nice to have a live feed for things like the Super Bowl, major news events, etc., especially since cable and telecom providers make us jump through absurd hoops to watch anything online. So when the Mohu team offered me a chance to demo the Mohu Curve, I dived in.

Features: What’s in the Box?

At its core, the Mohu Curve is nothing more than a digital TV antenna. However, unlike most of its competitors, Mohu attempted to make it look reasonably nice. The Curve is about a foot long and 8 inches high, and looks like… well, a curved piece of plastic. This is an improvement over most HDTV antennae that look like plastic sheeting stapled to a cable.

The Curve plugs into the nearly ubiquitous USB power supply found on most modern TVs; it’ll also work plugged into any other powered USB source.

Once you unpack it and place the antenna where you want it, you plug the Curve into your TV through its coaxial jack and tell your TV to tune to it. After 5-10 minutes of scanning through all the channels available, your TV will be ready to use it.

The Curve is dead simple to use. Plug it in, follow your TV’s instructions, and you’re up and running with live feeds. There’s no additional software to configure besides whatever your TV is built with. 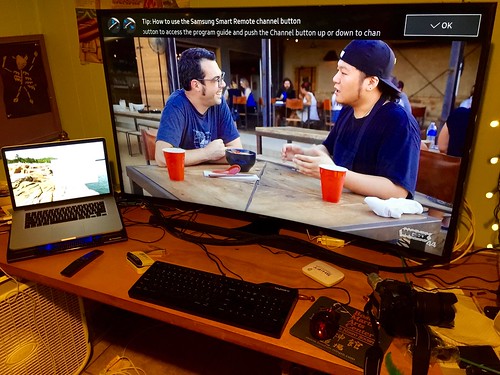 The Curve also has better reception than many of its competitors; you don’t need to monkey around with positioning. Just place it near any window or wall that isn’t a Faraday cage.

If you’re unfamiliar, a Faraday cage is any metal enclosure which blocks electromagnetic frequencies. Some houses have substantial amounts of metal in the walls; putting any antenna next to a metal wall will give you poor reception. Rule of thumb: if a room or place in your house has terrible Wi-Fi and mobile phone reception, it’s probably not going to have great over-the-air TV reception either.

The Curve has a few limitations; first, I don’t understand why it only comes with a coaxial output. If it had an HDMI output, I could plug it directly into my laptop as well as a TV. That’d be nice. Perhaps in a future version!

The Curve’s maximum resolution output is 1080p. This is a limitation of over-the-air TV. No TV station that I know of broadcasts over-the-air at a 4K resolution, so if your TV’s up sampling engine is poor, you’ll have a grainy picture.

For TV stations that broadcast in regular SD (aka 480p), you’ll have a picture that is unwatchable close up on a very large screen.

The Curve is also only as good as the local TV stations and what they broadcast. The Curve’s edition numbers indicate the maximum practical range of that antenna; the Curve 30 is designed for a maximum 30 mile radius from the transmitter. I would strongly recommend that you cut range estimates by 25%. I wouldn’t buy the Curve 30 if I lived 25 miles away from the station; buy the Curve 50 instead.

Mohu talks about cutting the cord, which is certainly one use-case for the Curve and their other products. However, the use-case I find more valuable is for second/alternate TVs. I have regular TV coming into my house from a Verizon FIOS line. I’m unwilling to buy a second converter box and a bunch of wiring just to make my second monitor a TV set. That’s a lot of hassle and extra monthly expense I’m not interested in, especially since I don’t watch much TV.

The Mohu Curve brings live feeds into my second monitor affordably and conveniently. I didn’t need to run any extra cable or pay Verizon a dime more. Combined with the smart functionality of my TV (built in Netflix, etc.), the Mohu Curve can either help you cut the cord or never need more cord.

If you want to cut the cord, or you want more TV without more recurring expenses, and you live in an area with good over-the-air TV reception, consider the Mohu Curve. It’s available on Amazon and a bunch of other places.

Disclosure: Mohu is a client of my employer. The Mohu PR team gifted a Mohu Curve to me as part of a blogger/influencer outreach program. I was given no other compensation, but indirectly benefit financially from their patronage as a client. All product links in this article are Amazon affiliate links.