The danger of hard selling during your conference presentation

Few things irritate me like a conference session that turns into a sales pitch for the presenter. I don’t mind a quick plug at the beginning or the end, or a relevant case study that shows how you accomplished something as long as I can learn from it, too. I get it; I work for a company that I promote in my talks. But when a session is just a long commercial? That’s just irritating.

Conferences have tried to handle this in the past to different degrees of success. PodCamp was founded on the BarCamp principle of the Law of Two Feet: if something isn’t working for you, just walk out. It’s a principle that has served unconferences quite well, and will continue to do so. Other conferences try to vet their speakers carefully or mandate that speakers also present with a neutral third party co-presenter. But what about being at a conference where your options are more limited, or group dynamics requires you to sit through a sales pitch? 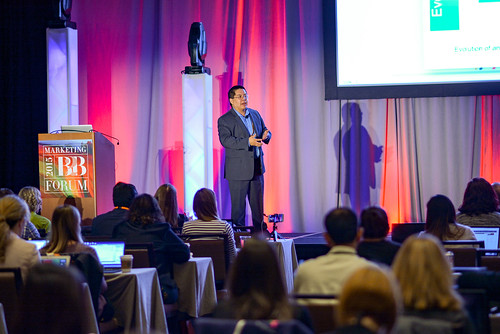 The mental game I play with such sessions in order to pass the time is reverse engineering. I’ll listen to a sales pitch session carefully, taking notes not about the talk itself, but its structure, the structure of the solution. From there, I daydream how to engineer something better, how to take the solution as presented, improve it with what I know and what I can Google, and possibly make a new, better version of the product being sold.

For example, I was at a conference last year that had a disguised sales pitch session (much to the organizers’ chagrin, as they later told me, and that speaker has been disinvited to future events as a speaker). The session was about some radical new social media analytics tool. The demonstration was on the light side, as these pitches tend to be, but once you dug past the sales hyperbole (“unrivaled social tracking capabilities for only $2,500 a month!”), there was a kernel of something useful.

Once I had the basic idea of what the product did, I hit my usual development resources (like GitHub) to see if anyone else had created something similar. While no one had, there were enough pieces laying around that, with a little bit of coding glue, I was able to craft something better, something that better suited my needs, while on the plane ride home.

That was almost certainly not the intent, not the desired outcome of the sales speaker, but it’s a consequence of not speaking to the audience and serving them first. Had he instead just talked about social analytics in general, and added the customary plug at the end, I would have been far less bored and far less inspired to craft a competing product.

This is the hidden danger of a boring sales pitch to an audience that has hackers and makers in it. If your pitch is blatant and boring, you just might inspire them to make your greatest competitor.