Marketing contains 32 times more data than you can see

This is an excerpt of my upcoming book, Marketing Blue Belt. Pre-order your copy now!

It’s the lifeblood of many businesses, the cornerstone of great marketing, and the most confounding problem companies and marketers face today. Today, we’re surrounded by more data than ever before. Think about something as simple as a Tweet on Twitter. It’s 140 characters at most, right? You wouldn’t think that sounds like a lot of data…

… But yet it is. Why? Because the data that makes a Tweet relevant isn’t just the Tweet itself. It’s all of the data about the tweet, what’s called the metadata. Take a look under the hood to see what I mean. Here’s a single Tweet: 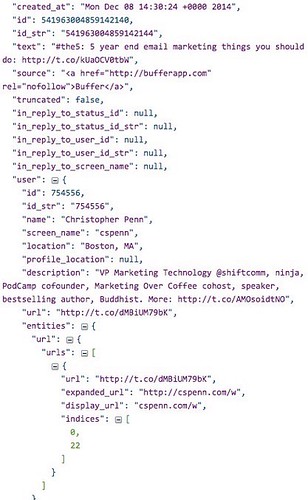 Something as simple as a Tweet can have a massive amount of data associated with it. Some of that is only useful to the technologists and developers, but some of it is useful, even critical, to marketers like you and me. We as marketers want to know about our reach and influence; that data is in the metadata. We want to know who the people are who share our stuff. We want to know about the audiences of the people sharing our stuff. All of this information is contained inside the Tweet’s metadata.

4,498 characters of data about a 140 character Tweet. Put differently, there’s 32 times the amount of data about the Tweet as there is in the Tweet itself, and we have to be able to download, analyze, interpret, and strategize from a significant portion of that extra data. Now consider all of the information on all of the marketing systems you have access to: Facebook posts, Instagram photos, Tweets, YouTube videos, mobile apps, and so much more. The data itself is growing at incredible rates; the metadata is exploding.

Are you ready to handle all of that data? Is your marketing program? Do you have the tools and the talent to make the most of it? You’d better, because this is the new marketing, the new reality.

Obvious book plug: pre-order today at MarketingBlueBelt.com and start to learn those tools and skills!