Chris Brogan recently mentioned not having a scratch game when it came to pancakes: 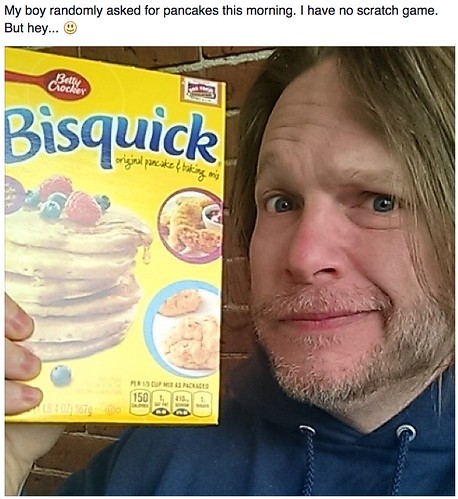 I thought this was amusing, because as foods go, pancakes are fascinating. For those folks who aren’t familiar, a pancake is a breakfast bread that’s cooked entirely in a pan or griddle. The recipe for your average pancake goes something like this:

Mix it all together and then put on a griddle in portions until cooked.

That’s a fairly straightforward recipe, and that’s where most people stop. They get the recipe, they cook the recipe, they eat. There’s an entire world happening beneath the surface, however, something that can up-level your scratch game considerably. The recipe describes the structure, and underneath the structure is the framework. Once you understand the framework, you know what can change and how much flexibility you have to adapt it.

Now that you understand the framework of what a pancake is and what all of the components do, you also understand what can be changed and how. This is what makes your pancake scratch game powerful For example, you can’t omit the baking powder without providing a different kind of leavening that’s gas-based. If you omit it or substitute it for something scientifically non-equivalent, you’ll cook up bricks rather than light, airy cakes.

You can, if you’re gluten-allergic, substitute the wheat flour for a different kind of flour. Doing so reduces structural stability, so you’d need to increase the amount of egg in order for the pancake to hold together.

You can, if you’re lactose or dairy sensitive, substitute in soy mile or almond milk or any other water-based protein colloidal suspension without needing to change anything else.

Want to reduce or substitute the sugar? Not a problem – in this recipe, it only adds flavor. You could substitute with vanilla extract and a bit of stevia.

Want to add dried fruit or chocolate chips or any other solid additive? Add a bit more egg or flour to provide additional stability.

Unsurprisingly, all of this applies not only to cooking, but also to your marketing. A recipe is nothing more than a tactic. (recall that strategy is the menu) If you just blindly follow marketing recipes without understanding what they do or what the outcome is supposed to look like, then you’ll forever be locked into the same way of doing things, rather than adapting as things change. Your marketing scratch game will be weak, and you’ll have to resort to using other people’s boxed products at a significantly higher cost and questionable ingredients.

For example, let’s say that you found a marketing recipe promoted by a social media expert that said you should follow 25 people a day and reply to anyone who mentions you. What’s the underlying structure? It’s about acquiring audience reach (follows do tends to net follow-backs) and engagement (replying to people sets the perception that you’re actually interacting and not just broadcasting).

Once you know those ingredients and what they do, you know what can change. If you don’t have time to follow people, a promoted account campaign can do the same thing with probably similar results. On the other hand, like the baking powder in the pancake recipe, you can’t substitute anything for engagement. There isn’t a viable substitute for acting like a human being and talking to people.

Take the time to not only acquire marketing recipes, but understand what the framework is that makes them work. That understanding will help you make them far more useful than just blindly following someone else’s experience and hoping it applies to your business as well. Your marketing scratch game will be amazing – and so will your business results.