What will kill email?

Greg Hyer asked an interesting question in the Marketing Over Coffee LinkedIn group: what will kill email?

The short answer is: nothing. The slightly longer answer is that anything based in an open standard is likely to be around for a very, very long time. Back in the day – and I’m talking 1995 here – the dominant form of public file sharing and discussion was Usenet, based on the open NNTP protocol. Usenet was notoriously difficult to use, from getting a desktop client set up to finding newsgroups that you wanted to participate in. When the World Wide Web and its HTTP protocol crashed onto the scene, Usenet began its long, slow decline into relative obscurity.

End of story, right? Not quite. Usenet is still around today. Google Groups is probably the best known interface for it, but there are plenty of others, and there are still plenty of users active on Usenet, with over 110,000 still active groups. Why hasn’t Usenet gone away, when there are so many easier and better ways to get at the same information? Because the NNTP protocol is an open standard, and because it provides some basic utility, it’s still around.

The protocols that make up email – IMAP, POP3, SMTP – are equally open standards. Anyone can get a cheap piece of hardware set up with Sendmail or Postfix and have themselves a fully standards-compliant mail server up and running as fast as you can build it. There’s no one you need to buy software from or get approval from – you just build it, connect it to the Internet, configure your DNS records, and you’re in business.

This is why email will likely never die, at least not for a very, very long time. You can’t set up your own Twitter server. You can’t set up your own Facebook server. In fact, of all of the major social networks, the only one that promised any kind of protocol-based service with independent ownership was Google Wave, and that was killed off in just three years by Google after it failed to gain any kind of traction.

For social marketers, this is why we’ll be on the conveyor belt of “shiny new networks” that rise up, blossom, and then die, but will not have a stable platform. Each company in the social space is unwilling to open its code for independent implementations because their business models require exclusivity of ownership. As a result, the rapid birth-death cycles of popular social networks will continue, from Friendster to MySpace to Facebook today. On the bright side, it means that for many of us in the digital marketing space, we’ll have continued opportunities to find and seize early mover advantages from nascent networks as they catch on. 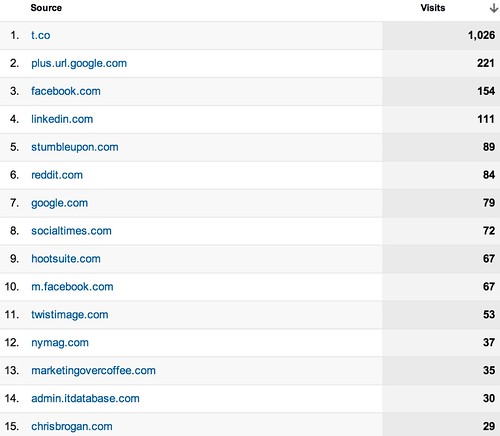 Be ahead of the curve: watch the referrers in your Google Analytics carefully. Look for new referring sites and check them out, perhaps on a monthly basis, to see what’s sending new audiences to you. The next big hit might be in there already.