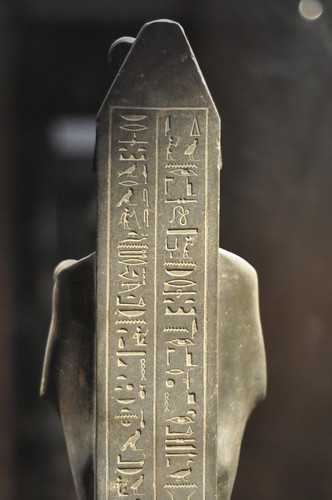 In the early days of what would become the science of Egyptology, the ubiquitous hieroglyphs that adorn many Egyptian relics were indecipherable. The culture that spoke and wrote the ancient Egyptian language was long gone, and Arabic and European scholars were reduced to blindly guessing what the different symbols meant. It wasn’t until 1799 when Napoleon invaded Egypt and discovered the Rosetta Stone that hieroglyphs began to be accurately translated. Why? The Rosetta Stone contained three version of the same memo (and it was basically a large interoffice memo from the kingdom to the priesthood) in hieroglyphs, demotic (commoner) text, and ancient Greek.

The ancient Egyptian language is a peculiar one that combines phonetics, literals, and ideograms together in a complex interplay. Sometimes a picture of a bird will represent the sound of a letter; other times, that same bird will represent a bird. In order to read hieroglyphs, you need an understanding of the subtleties, nuances, and contextual changes that give the language meaning.

When you think about it, closing a sale isn’t much different. When you’re closing a deal, you’re juggling different contexts and different states of mind in a prospective customer that are as fluid as hieroglyphs. One moment, the customer is using words that suggest a need for emotional inspiration or reassurance. In the next moment, those same words are being used to define literal contract terms.

Where a master salesman differs from the average salesman is in the ability to recognize when contexts are changing and be able to understand how that language changes as he or she listens in real-time. The only way to develop that level of understanding is through a post-mortem with the customer. If you work with a phone system that permits it, start off all your sales calls with the disclosure that calls are recorded for quality assurance (a nearly meaningless phrase that everyone says nowadays) and then record your sales calls.

30 days or so after a sale has completed and the customer has been a part of your company, go back to the customer, buy them coffee or something, and ask them at what point the decision was made. Once you know when the decision was made, go back in your call log and listen to the call or calls that preceded a decision and listen to the language you used and the customer used – that’s your Rosetta Stone, your way to decipher what helped close the deal. Over time, as you gather more and more of these call logs, you may start to notice similarities and commonalities among your successful calls. That’s when you look at that, extract the data, and refine an even better lexicon of the words, phrases, and approaches that are successful for you, much in the same way that Egyptology was revolutionized all from what was a mundane interoffice memo.