The McDonalds Trash Can

I was at McDonald’s the other day, having lunch, and watched a fascinating exchange between a father and his son. The boy was probably 6 or 7, somewhere in that range. They were eating their meals, a Happy Meal and an adult sandwich, and they were just finishing up as I sat down. The father asked the boy to put his Happy Meal box and packaging in the trash, which the boy dutifully did, placing it carefully on top of the very full trash can, so full that the box didn’t even fit inside. 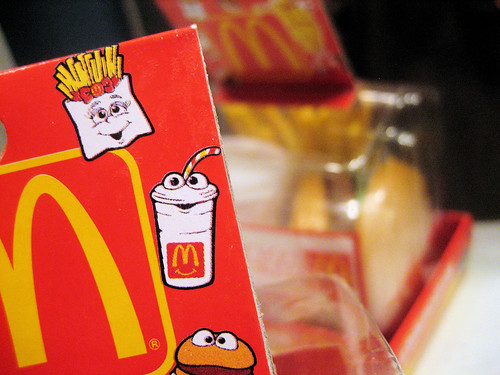 A few seconds later, the boy realized that he left his toy inside the box and wandered back over to the trash can to retrieve it. Immediately, the father leaped up in alarm and shouted (loud enough for everyone to take notice), “Don’t touch that! It’s full of trash and germs!” To his credit, he did manage to carefully fish the toy out of the box and take it and his son to the rest room to wash it off.

What I find fascinating about this interaction is the symbolic power of the trash can in the father’s eyes. Instantly, what was previously perfectly fine for his son to touch just moments before immediately became harmful to him, so much so that the rest of the restaurant heard about it. It was irrelevant to him that the toy inside the box was protected from the rest of the trash, that the box was in the trash for mere seconds, and that the trash is changed reasonably frequently at the restaurant, frequently enough that spoilage, rot, and decay never occur while it’s still inside. (the dumpster out back is another matter) Just the mere symbolic nature of the trash can created a panic response.

It should be no surprise that we still have things like racism, prejudice, discrimination, and hate with us, if the simple symbolic nature of the trash has the ability to inspire immediate revulsion at anything placed in proximity to it, even something that was moments prior a positive, good thing.

Food for thought for the marketing crowd: take a look around at your web analytics and look for pages on your site with an abnormally high bounce rate. Then take a look at the page and ask if you’ve unintentionally used some content – a photo, a phrase, some kind of trigger – that creates a similar visceral response that could be responsible for the page’s very high bounce rate. It’s entirely possible you’ve invoked something that creates an unwanted response that’s causing people to leave. (As per usual, premium subscribers to my newsletter will get details on how to create this custom report in this Sunday’s newsletter.)