Mark Bevans posed this fascinating challenge to me:

“Social media strategy for big tobacco firm? How should they approach, what can they try? am looking for ideas.”

Before we can entertain any discussion of social strategy, we have to be honest with ourselves. It is human nature to willingly make bad choices. Alcohol, tobacco, firearms, warfare, drugs, violence, pornography, addiction – it’s part and parcel of human nature, for good and ill. Sometimes we can manage bad choices and mitigate their effects, as in the cases of a glass of wine or beer every now and again. Sometimes we can’t manage bad choices, like a kilogram of cocaine in an evening (with lethal consequences). When it comes to tobacco usage, common sense should indicate that putting something that is actively on fire in our mouths is generally unwise. Tobacco is a choice, though due to its nature (it’s on fire), it’s more heavily restricted since the exhaust smoke can impact people who have made the choice not to use tobacco.

If you’re a tobacco firm of any kind, your business relies on people making a generally bad choice for their health. That said, 1.1 billion people using tobacco products and as much as 33% of the adult population (citation, p.26), the market for tobacco isn’t likely to ever go away.

Those people who are customers of yours are likely loyal customers, and that’s where social strategy begins. My grandfather, for example, smoked Marlboro cigarettes and refused to even entertain the idea of using another brand unless it was absolutely necessary. Brand loyalty based not only on image but product preference can be incredibly strong.

Create social properties designed around the reasons people use your specific product, and then actively find and collect the people who are already talking positively about you. 20 seconds on Twitter search found this set of mentions about the Altria brand Marlboro among others: 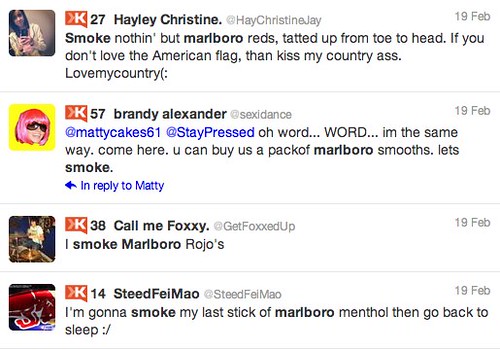 You have a community of people who love your brand. Gather it, and then proceed to execute on standard community management strategy like any other product or service. Except for the adverse health consequences and regulatory requirements, there’s not much different in terms of B2C social strategy for tobacco compared to any other consumable product. That’s the secret, if there was one.

One final area worth considering from a marketing perspective is the unique nature of recreational substance usage, which includes tobacco, alcohol, and other currently legal drugs. At the very least, society tends to deeply frown upon (if not outright regulate) attempting to create new customers, especially from certain demographics (tobacco marketing to children and teenagers, for example). Likewise, because the product itself is harmful in greater than occasional quantities, encouraging customers to consume more of it actually reduces your customer base through illness and death.

That puts you in a challenging catch-22: you are restricted in new customer creation and existing customers suffer adverse consequences for more than casual usage. The area for growth, at least in terms of marketing and profitability, is most likely in artisanal brands and products.

For example, tobacco production at an industrial level creates a product that’s on par with other industrially produced goods. There’s a strong contrast in flavor and nutrition between a loaf of commercial white bread and an artisanal bread from your local bakery, a fact that many food marketers have leveraged to great success. If you’re constrained, as tobacco is, about who you can market to and your product is inherently harmful, going the artisanal route would give some additional grist for community management and provide a viable upsell for increased profitability.

Thanks for the challenging question, Mark!

On a personal note, as I mentioned before, my grandfather smoked Marlboros. Unfortunately, it killed him, as he died of a heart attack induced by emphysema when I was 7 years old. I’m personally not fond of tobacco companies, especially in efforts to create new users of the product among younger audiences. Adults, however, are generally capable of making their own choices, good or bad.

I’ve also been friend to and active supporter of American Indian organizations and cultures locally and recognize that tobacco itself has a legitimate place in our shared human history and culture (originally it was used by American Indians as an entheogen, part of shamanic rituals). Writing this post was especially challenging as it required holding separate, conflicting views and emotions together at the same time in order to produce some level of insight for a legitimate challenging question.