How I got my black belt

As Facebook says it’s his social media birthday, I thought it’d be fun to share one of the most powerful moments I’ve ever experienced in my life, thanks to my teacher, Sensei Mark Davis.

Each fall, there’s an event called New England Warrior Camp (which predates PodCamp and BarCamp and other camps by quite a number of years) hosted by senior master instructor Ken Savage out in Sudbury, Massachusetts. The camp is held at a rustic Boy Scout camp site with over a thousand acres of fairly unrefined woodland. 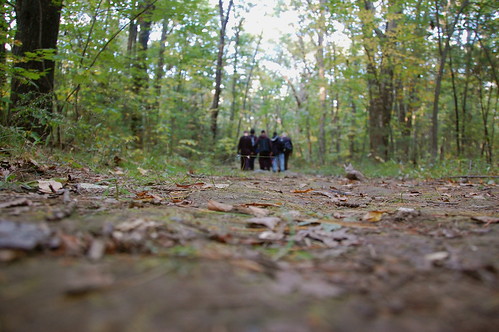 Back in the fall of 2004, Sensei Davis put a few of us up for our black belt test while at New England Warrior Camp. We were given notice that at any time during the weekend event, we’d be asked to test. We had no idea what it would involve, or where in the thousand acre campground it would occur. Right around 11:30 PM on Saturday night, we were instructed to be at a pavilion in the woods on top of one of the taller hills, without flashlights or guides. We needed to use our ability to navigate at night to get to the testing site. After a brisk 10 minute hike (which felt more like hours of anticipation), we reached the pavilion and found the entire corps of black belts of every advanced degree waiting for us. Talk about a moment that truly inspires dread.

My test started around the third or fourth candidate in. I was told to stand in the center of the room and hold the space – that is, don’t retreat, don’t advance, just hold the space and protect myself using all of the techniques and skills I had been taught. Immediately, four of my seniors, the majority of them other teachers of mine, surrounded me, at least two of whom are literally twice as large and strong as I am.

Sensei Davis called out for the test to begin, and the world suddenly caved in.

To this day, I have no idea how long the test actually was. I remember glimpses and flashes of moments, but once it started, time and space disconnected, and didn’t resume until after Sensei Davis called for it to stop. I had no idea whether I had passed or failed, only that I had survived.

After all of the candidates had been put through the test, Sensei Davis gathered us all together and told us what the test was about.

Sensei Davis picks and designs his black belt test to emphasize only one core aspect: the ability to keep going in the face of adversity. It’d be simple to pass a test at what you’re good at. Sensei Davis does the opposite. For students who are experienced fighters but not strong academics, he will design a test that consists of textbook-perfect performance and recitation (in Japanese, no less) to push their weakest area of learning. For students who are good at technique but less strong at improvisation, he will design a test that is entirely improvisation. This is the hallmark of an outstanding teacher and an excellent test for endurance.

Our test was to see if we could keep going when every instinct, every part of our minds, bodies, and spirits was being pushed to give up. Physical attacks punished the body, while insults, mocking, and taunts encouraged our hearts to give up. To keep going in spite of all that was the entire test, because that one ability – perseverance – defines so many of our successes in both the martial arts and life. You can have all the advantages in life possible: a wealthy background, beautiful looks, a strong intellect. None of it matters if you give up and fold at the first sign of trouble. Conversely, when you look at all of the people in the world you admire as legitimate successes, all of them share the same unwavering perseverance, the same endurance to outlast temporary difficulties in order to win. Perseverance conquers all.

That is the gift that Sensei Mark Davis has given all of us in our training and lives. Helping us forge that indomitable will on the anvil of the dojo training floor has made many of Sensei Davis’ students immensely successful, and that’s a gift we can all only pay forward and pass along. I don’t exaggerate when I say that everything that I’ve accomplished in my own life is due in very large part to the training I’ve received from Sensei Davis.