As of late, I’ve been playing a rogue in World of Warcraft (subtlety PvP for those who play), which is an interesting damage-dealing class. Rogues use stealth, hard-hitting attacks, and all sorts of counterattacks to make themselves highly effective against other players. 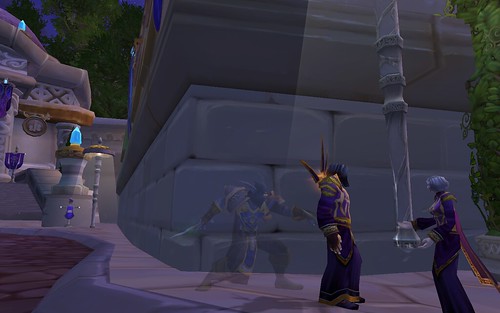 One of the interesting things about the rogue class is that they spend a lot of time positioning, watching, observing, and looking for opportune moments to strike. This is largely because unlike other classes, rogues have a very limited pool of resources on which their attacks depend. In combat, they remain stealthed, waiting for the right opportunity and then unleash a strong opening attack that consumes their immediate resources (energy). Assuming the attack is successful, they gain additional resources (combo points) with which to either counter the opponent’s defenses or finish them off.

Sound familiar? This is effectively what a skilled salesperson does. Let’s compare:

1. Extensive observation. If you’re good at sales, you spend a lot of time looking for the right opportunity, instead of just rushing headlong onto the battlefield and hoping things go your way. You let others make all the noise and attract all the attention, while you look and listen for opportunities to make the biggest difference possible.

2. Strong opener. Rogues and salespeople both share the common worldview that in many cases, you only get one shot. You don’t open weak or with your least effective materials. Having watched carefully and understood what the opportunity is, you open strong. Sometimes, if the opportunity is aligned well enough and the need is great enough by your prospect, you win on the opening move.

4. The finisher. Like rogues, the good salesperson closes strong, using their finishing moves appropriately to end the sale.

It’s telling that for a good rogue, 99% of the fight is spent in stealth, watching the battlefield, waiting for the right opportunity, prospecting for resources to take or objectives to capture and for opponents to let down their guard. A well-played rogue is rarely visible, rarely heard from, rarely noticed until it’s far too late to do anything about them.

The same is true for a really good salesperson. They spend most of their time doing research, understanding the situation, maybe having quiet conversations, slowly positioning and getting ready to bring out exactly what’s needed at the right moment. 99% of the time, they’re not selling in the traditional, used-car salesman sense – and when they are selling, if they’re doing it right, you won’t really notice until after it’s over and you own the goods.

Obviously, there are some subtle differences between rogues and salespeople – generally speaking, a good rogue leaves their opponents dead, stabbed multiple times with poisoned knives while a good salesperson creates an enduring relationship that follows their client from company to company and job to job. But the similarities on good technique, positioning, tons of observation, and pursuing the right opportunities at the right times are universally applicable.