You Ask, I Answer: Podcast Marketing Changes Over Time? 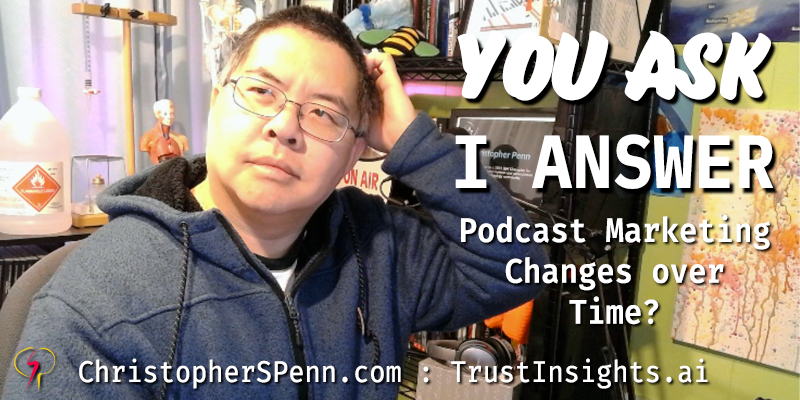 Lauren asks, “How is podcast marketing different than it was 5 years ago? 3 years ago?”

In today’s episode, Lauren asks, How is podcast marketing different than it was three or five years ago? Since the Third Age of podcasting began, which is targeted around 2015, after cereal and NPR really blew up podcasting and made it a cultural phenomenon.

A few things have changed one, there are a lot, a lot more podcasts than they used to be back in the day, and we’re talking 2005, very early days of podcasting, you could probably name all 1000 podcasts, right at the time, there were not that many.

And it was possible to know most of the producers, most of the people who are creating content, Today, that number is probably closer to 2 million, 2 million different shows.

What happens when a space gets saturated? One competition goes up dramatically.

This thing of, you know, somebody’s taking you and putting you into their ears or on their phone or in their eyeballs or whatever.

But you still can only listen to one at a time, which means that we have 24 hours.

And when there’s 1000 shows, you can pick and choose, you know, maybe a few shows you’ll listen to and get a decent chunk of the entertainment you want.

And as a marketer use that you have a chance of getting a slice of that time, when there’s 2 million shows.

That’s basically infinite choice, right? There is no way even at 10x speed that a an audience member could listen to more than a tiny fraction of the number of podcasts that are out there.

So competition is dramatically harder for people’s attention.

And this is true of all entertainment right now.

And not just podcasting.

Although this is the context we’re having, right? The number of shows that are on Netflix or Disney plus or Hulu or Amazon or whatever, much, much higher the number of audio outlets, right Spotify, and I heart and Stitcher and all these places.

So much more audio to choose from.

Again, every new channel eats into that same 24 hours that our audience has.

from other places, right to bring in more podcast audience because the audience is in podcasting now is saturated.

They are they’ve got no shortage of content to listen to.

And it is a knife fight to get even a tiny bit of extra market share.

It is a knife fight to get any kind of market share in general, because people’s attention is everywhere, right? Tiny little pieces of attention being doled out with bread crumbs across the media spectrum.

There is a lot more money in podcasting now.

Right companies have created 1000s and 1000s of podcasts, whether they’re good or not, is a separate discussion.

But the reality is they’re in there.

One of the most important lessons from even very early on with podcast marketing is that your podcast is a product, you have to market it like a product, right? That means you bring out the four P’s and your Porter’s Five Forces and your SWOT analysis and all that stuff that you use to market any product or service and you are now marketing your podcast.

So it had a it had better be really good.

And B you have to acknowledge that it comes with an opportunity cost, right and that opportunity cost is you couldn’t be marketing your revenue generating products and services.

And you have to trade off some of that time and some of that effort for your podcast, because you want it to grow.

There’s a lot more distraction in podcast marketing than it was three or five years ago.

That said the audience is larger right ever since cereal took off.

The people who are have heard of a podcast has gone way up, right? Something I believe Edison Research is infinite dial system like 90 93% of people have at least heard of podcasting, which is a huge number.

It’s something like 26% of at least in the American It is 26% of people listen to a podcast at least once, once a month or so.

But you’ve got to find the right people that really love your show.

You might, but you’re probably not going to hit it out of the park.

Right? If you have 1000 listeners, you’re doing really well.

Yeah, heck, even if you have 100 listeners, you’re doing really well because it’s so hard to get audience these days.

If your shows your your average number of downloads for show is in the hundreds is in the triple digits.

Are you getting 2 million downloads a show? No, probably not.

Does that matter? may not.

If you’re trying to be mass market, like your your comedian or something, then yeah, that’s kind of a rough spot.

But if you are a brand, and you’re just trying to get some incremental audience, the people who listen to a podcast from your brand, they’ve dedicated and 100 dedicated folks can power a lot of business.

So if you’ve got that 100 listeners, you’re in pretty good shape.

So that’s really how podcast is different.

podcasting is different, and the marketing of your podcasts.

It’s so much more competitive.

And you’re competing against everything that wants people’s attention.

So you’re not just competing against other podcasts.