You Ask, I Answer: Growing a Podcast from Scratch? 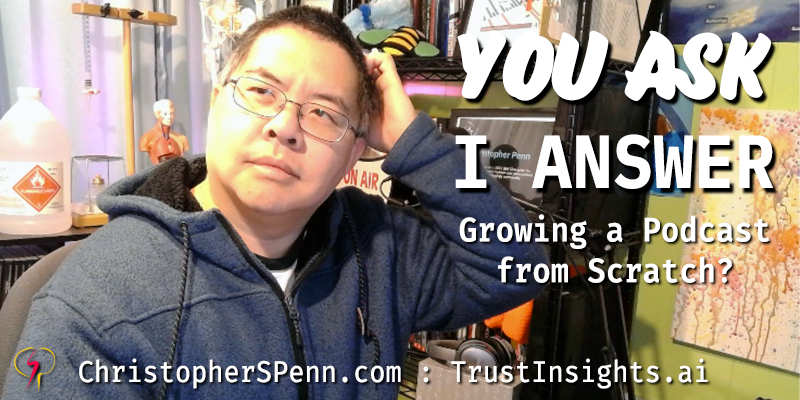 Lauren asks, “How can a podcast grow from absolutely nothing?”

In this episode, Lauren asks, How can a podcast grow from absolutely nothing? Well, that sounds good.

Ideally, that niche is not so saturated, that you have no chance of being heard.

You have to then build the product, which is your show.

And then you have to distribute it, right, you’ve got to get it out there, publishing it to all the different platforms, you have to activate it using influencers of some kind, friends, colleagues, podcast directories, you name it.

And then you’ve got to gotta spend some money to promote it.

Right? It can be running ads for your show, it can be doing influencer marketing and partnerships and showing up in other people’s newsletters and their shows, trading promos, whatever it takes.

But growing a podcast.

No one’s paying for your podcast, like they’d be paying for, say, their Netflix subscription.

But everyone is paying in some degree, the same currency and that currency is attention.

How much of that 24 hours is going to be available for entertainment in general, right? Because a podcast really is a form of entertainment.

And then what slice of that are you going to be able to to garner That’s where having a very clearly defined show with a very, with a known audience you want to go after it makes things a little bit easier, right? If you have a show, you’re like, Oh, this is a comedy show.

We want it to appeal to everybody.

It’s not gonna appeal to anybody.

Right? That’s much too broad, much too shallow.

Not particularly not, it’s not going to take off.

If you had a show that was specifically targeted at, say, Danish expatriates in Mexico.

But that’s a super targeted audience, you and the likelihood of you being able to market that to that audience is pretty good.

That’s that’s the show for me.

Because that is me.

Let me tune in see if this person’s experience is the same as mine.

When you look at successful podcast, generally, generally speaking, not the outliers, like Joe Rogan, or whoever.

But just generally, there’s a niche, there’s a purpose, there’s something that that show fulfills, that does not exist in the regular media landscape, right? You can get talk shows, tons of them, but there’s got to be something that is a unique twist, for example, the show hot ones by first we feast has a totally unique angle, and that is to make people really suffer by eating hotter and hotter hot wings until they can barely function as human beings whilst trying to answer interview questions.

And it’s a very interesting show.

It’s also powered by some really amazing research, those folks do a really good job of asking questions that are not the same as everybody else.

That’s a premise of people who are just slightly sadistic, right? We watch that show because we like to see people in pain.

Now granted, that show has ballooned in its popularity, but the premise was really unique.

Right? There are a lot of shows that were the premise is around a personality, that personality has a following and you build that show around that.

So you look at somebody like Brie Larson or Gary Vaynerchuk.

There’s the people who have their own sort of cult of personality around them, and their fans will pretty much consume anything they publish period.

Right? There are other shows where there’s information you wouldn’t get somewhere else.

There’s information that is so unique.

That’s worth tuning into, for example.

Oh, the fifth column has a both YouTube channel and a podcast.

And the show is about a sort of a liberal, a very liberal right let’s see redneck but

a person that you wouldn’t expect to be liberal.

Let’s put it that way.

Look at the show Holly Randall unfiltered This is a show about I’m as by a producer of adult entertainment.

And she interviews other people in that industry.

And so total behind the scenes in that industry, and that’s information you can’t get elsewhere.

Where shows go wrong, is when the information that shows us information you get everywhere else, right? Generic shows, shows have no twist that have no unique selling proposition like any product, right? If you’ve got a brand of chewing gum, and it tastes pretty much like everybody else’s, you’re not going to do well in the market.

Right? If you have a brand of headphones that are okay, you’re not going to do well on the market.

You’re not going to do okay.

So what define success for a podcast and how you grow a podcast from absolutely nothing is happening, that niche that you can own, that there isn’t a show that does that particular thing.

And again, you don’t have to do anything really crazy.

Marketing over coffee, one of my shows the value proposition and the interesting niche there was that for the first seven years ago that show, we recorded it in a coffee shop, because it happened to be convenient to where John and I used to, to both commute the same general direction.

And so we would meet up at the Dunkin Donuts on nine in Boston to do the show at 5am on Thursdays before we had to go to our regular jobs.

And it was that ambience that really set the show apart in the early days.

And then later on the value proposition is marketing information that you’re not really gonna get anywhere else.

Having that today, there’s nothing special about it.

There’s nothing special about having a podcast.

So what what is your value proposition? What is your unique selling proposition that nobody else is going to do? And again, doesn’t have to be crazy.

But it does have to have a very specific audience in mind.

Now, a lot of business podcasts in particular, have a defined audience that is somewhat unique, but at the same time really isn’t.

So you’ll hear business podcasts to say like we’re after the fortune 100 CEOs.

Well, yeah, so is everybody else.

What’s unique about your podcast that they would find valuable that they can’t get somewhere else, you regurgitating industry news, not going to be appealing.

What’s your value that you can offer? Is there something that you can do that nobody else is doing? You know, if I was marketing to like CFOs, I would have unique predictive analytics forecasts for common market indicators and say, Hey, these are our bets.

Take them or leave them there.

We obviously don’t take investment advices from some random person on the internet, but it would least set you apart from all the other business shows because you’d have these predictions that depending on how accurate you were might be really appealing to folks and not wishy washy predictions, but something like we’re betting you know, dow 30,000 Next week.

Obviously, you want to use actual predictive analytics software to to generate those results, but it will be unique, it will be different.

So that’s the answer on how you grow podcast from absolutely nothing.

Have something that a defined audience really, really wants.

They can’t get anywhere else, and then get it in front of them.