Average, Median, and Your Marketing Analytics

If you’ve never taken a statistics class, yet you’ve ended up being responsible for your company’s marketing analytics, then this article is for you.

One of the core statistical concepts we rarely hear about is the median. We hear about averages all of the time: average revenue per user, average website traffic, average number of new followers gained. But here’s the thing about averages (and any statistic, for that matter): sometimes they don’t tell the whole story.

About the only time the average person even hears the word median (besides when they drive in it on the highway) is from politicians when they talk about median income.

What’s the difference? Why would we use one or the other in our marketing analytics reporting?

Broadly defined, an average is when we take the sum of all of the numbers in a data set and divide by the number of things in the data set to look for a central value.

Broadly defined, a median is when we find the middlemost number in a data set.

Here’s an example. Let’s say we have a store, and customers come into our store to buy things:

The median, the middle value (the red box) is 1 item per customer.

If I’m projecting sales volumes for the coming year, which should I use? The average is skewed by one big, high-value customer, but the vast majority of my customers only buy one thing. That high-value customer is an outlier. If I’m planning prudently for the coming year, I’m better off projecting on the median than the average, otherwise I’ll forecast a sales volume that may be twice as high as it actually turns out to be.

Digital marketing is FILLED with outliers. If we want to measure accurately, we have to deal with them – and that’s why median is important. Medians help to give a second perspective on the same data, one that deals with outliers a little better.

Let’s look at this chart of my personal website’s analytics, focusing on the month of October.

If we do the math, the average daily website traffic on my site is 410 visitors a day this month.

Let’s chart that out. Does that look right to you? 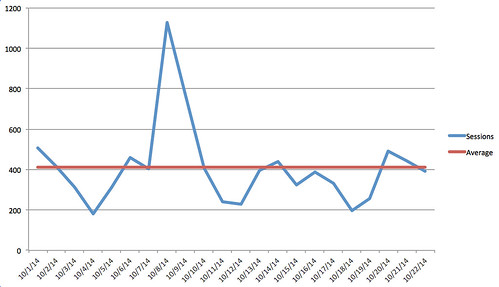 It doesn’t to me. There are more parts of the blue line below the red than above the red, and if an average is supposed to help me find the middle, it’s not necessarily doing the best job in this case.

Now what if we put the median on here, which is 393 visitors a day: 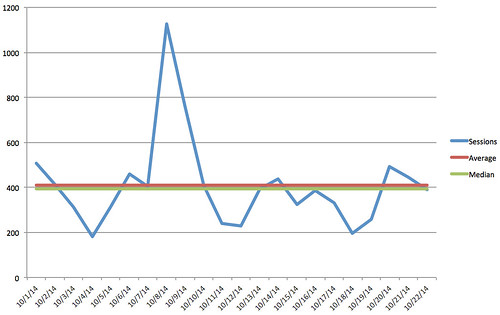 There is a difference. That big spike drove up the average, but the median remained relatively resistant to it.

If I’m trying to budget for personnel, for advertising, for anything that relies on web traffic, which number should I plan around? I’d use the median, because it’s more representative of the typical day on my website than the average, in this case.

Keep the median in your toolbox and when you’re doing analysis and reporting on any series of data in marketing that calls for an average, calculate the median at the same time. It may shine some light on what’s going on in your data.