Artificial intelligence poses a future potential problem in the exacerbation of income inequality, much in the same way that automation and robotics creates an income inequality problem today.

The Old Way of Making Money

In the days before automation and robotics, factories hired humans to do repetitive, boring, and dangerous tasks. Factory owners sold their goods, keeping a chunk of the profits for themselves, and passing the rest along to workers. In exchange for performing tasks, workers were compensated for their labors.

What did those workers then do? They went out into the world and spent their pay. They bought groceries, paid rent, drove cars, and so on. These workers – and their compensation – fueled the economic growth of the Industrial Revolution and beyond.

Factory owners attempted to find ways to optimize worker productivity over the decades, until the era of robotics arrived in force in the 1990s. Suddenly, tasks performed by humans could be performed by robots instead at greater speeds, with fewer errors, and in environments that were hazardous to humans. The net effect? Job losses. According to the National Bureau of Economic research’s 2016 working paper, one new industrial robot coincides with an employment drop of 5.6 human workers: 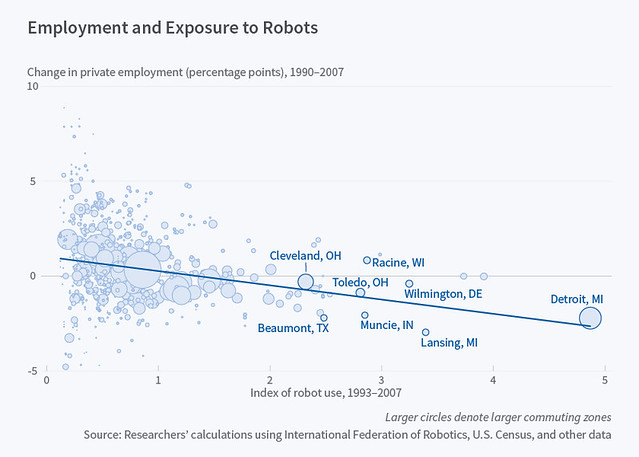 What happens to those 5.6 workers? They no longer spend money until they find new employment. Meanwhile, the factory owner reaps increased profit margins because they spend less on an ongoing basis for the same or better merchandise.

The net impact is increased income inequality. The factory owner makes more money while the workers make less – or none.

As we’ve discussed in the past, AI promises automation of cognitive work in the same way that robots promised and delivered automation of manual work. Filing expense reports, correcting timesheets, updating stock portfolios – there are thousands of repetitive tasks in every cognitive job that are ripe for automation.

As we saw with industrial robots, industrial AI could remove significant portions of labor from all kinds of jobs, so much so that jobs could be consolidated. Instead of accounting, HR, finance, and marketing employing dozens or hundreds of people, with general purpose AI, we could see just a handful of office managers or leads overseeing thousands of AI instances doing the same work – and doing it better than their human counterparts ever did.

The outcome will be similar to robotics, with one significant exception: industrial robots have a substantial capital investment up front for a very expensive robot. AI has significantly lower costs for what are effectively intangible functions performed as a service. Anyone who has ever set up a new cloud computing instance knows how quick and easy it is to provision a new service – just a few clicks of a mouse and a new virtual machine is ready to go in minutes, if not seconds. Thus, while one robot replaces 5.6 human workers, one AI could replace many more office workers.

The net effect will be even sharper income inequality. Company owners and officers will enjoy significantly improved profit margins and far less overhead. But what of the armies of secretaries, accountants, marketers, and HR staff? The number of jobs available to them will diminish over time, magnifying income inequality.

The Consequences of Income Inequality

A number of solutions have been proposed to fix the income inequality problem specific to technology, from universal basic income to robot taxes.

The key to any solution is reminding the upper end of income and property holders that redistribution of income is in their long-term interests. In Dr. Robert MacCulloch’s 2005 paper, “Income Inequality and the Taste for Revolution”, he found:

Although property rights are the cornerstone of market economies, throughout history existing claims have been frequently overturned by revolutions. One unsettled question is whether income inequality affects the likelihood of revolt. This paper takes an approach different from previous studies by introducing data derived from two surveys of revolutionary preferences across a quarter‐million randomly sampled individuals. More people are found to have a preference for revolt when inequality in their nation is high. A 1‐standard‐deviation increase in the Gini coefficient explains up to 38 percent of the standard deviation in revolutionary support. The results hold after controlling for a set of personal characteristics and country and year fixed effects. Since higher levels of income are found to have a negative impact on the taste for revolt, the results suggest that either “going for growth” or implementing policies that reduce inequality can buy off those individuals with revolutionary preferences.

Of the solutions proposed, universal basic income appears to be the most viable; governments print inflationary amounts of currency anyway, and income redistribution is an easier sell than direct taxation of businesses.

Whatever we choose as a society to solve for income inequality, we must choose sooner rather than later. AI will drastically shift income in our current economic setup, paving the way for civil unrest or worse.