Marketers are abuzz with polls on Twitter. To quote The Flash’s Harrison Wells…

I do caution restraint.

Here’s why: Twitter polls are no more scientific or representative than sending out an email to your mailing list. Additionally, Twitter does not provide any kind of data which can be used for weighting.

Let’s look at an example. Suppose I ask my followers, “What is your opinion of @cspenn?”. What’s the likely outcome to be? Naturally, it will be skewed in my favor. Now suppose my arch-enemy runs the same poll. What’s the likely outcome to be? Of course it will be skewed in their favor. Which is the “right” answer? The answer is neither. Any individual account’s followers will automatically bias a poll.

This kind of bias shows up in many more places than just the obvious previous example. Here’s a sampling of Pew Research’s Twitter demographics: 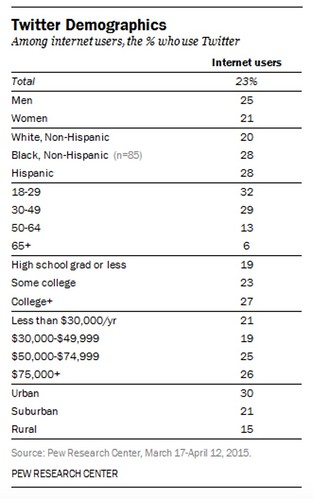 Contrast this with the US Census Bureau’s Current Population Survey:

Note, for example, above that the representation of Black Americans on Twitter is more than double the actual population.

This sort of data skewing is problematic at best. If you’re running a poll to ask about an issue that’s of importance to race relations, you will get a different answer from the general population on Twitter than you would on, say, Facebook.

If you’re trying to ascertain the market viability of a product, if your product’s target audience is not represented on Twitter, you’re going to end up believing your product isn’t viable when it might well be.

If you want information about your specific followers’ perspectives, such as understanding why they follow you, or what their view is about you, Twitter polls are fine.

If you want representative, unbiased, statistically valid surveying of the general population, Twitter polls are not fine. They’re likely to dangerously mislead you. If you need that sort of surveying, hire a research firm to do it for you. You may pay more, but if your business is at stake, it’s worth the investment.