Back in May, Facebook announced Instant publishing for certain publishers as a way of increasing the prominence of their content in the News Feed. Publishers push their content directly into Facebook, rather than linking out to their sites. Since then, there’s been a recurring mantra among marketers that long-form content directly on social networks must be the new way to engage with your audience. 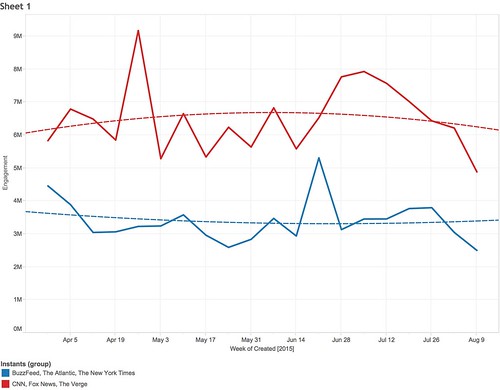 Above, three publishers in the program – BuzzFeed, The Atlantic, and the New York Times – are represented in blue. Three publishers not in the program – CNN, Fox News, and The Verge – are represented in red. Engagement is measured as a sum of likes, comments, and shares on a per-post basis, aggregated to weekly levels. Trend lines are shown with third order polynomial fitting.

So, did the program kickoff in early May make a huge difference? The publishers in the program appear to have not done significantly better in terms of engagement than publishers not in the program. Now, that could be a function of the fact that their content might not be any less or more interesting than it was previously, but more exposure should have increased raw engagement numbers. Instead, we see nothing earthshaking happening for the publishers above in blue.

What do we glean from this? Choose going direct and/or going to a long-form publishing program based on whether it’s the right choice for what you can accomplish organizationally. Avoid shiny object syndrome and marketing memes that say “This is the new right way to do things” because your experience is likely to be different and unique. Just because XYZ social media publication says long-form or native is the right way to go doesn’t mean it’s true.

Above all else, continue to test on your own to find what works for your content and audience.