How to measure success without goals in Google Analytics

One of the first maxims of great marketing analytics is to have a goal with an objective value set. Tools like Google Analytics make this elementary to configure; simply decide on a goal and decide on the value of the goal, input it into the software, and you’re up and running.

But what if you don’t have any goals? For example, say you’re the new CMO/VP Marketing and you walk into the company. On day one, you look at their Google Analytics and it’s a mess. Nothing is set up right. How do you begin to estimate what’s successful and what’s not?

Google Analytics has a number of tools ready to go and operational out of the box. One of those is the ability to segment your website’s traffic into new or returning users. Could either of those segments correlate well to goals such as lead generation and purchases?

To find out, I looked at some anonymized data from various types of companies to see what the correlation was. A reminder, of course, that correlation is not causation, but in the case of a website, it’s logically quite difficult for someone to convert without visiting your website, so there is some order of operations.

Let’s look at a few examples to see if there’s some logical connection between conversion and new users, or conversion and returning users. We’ll start with a B2C services company. What’s the relationship between new users and conversion? 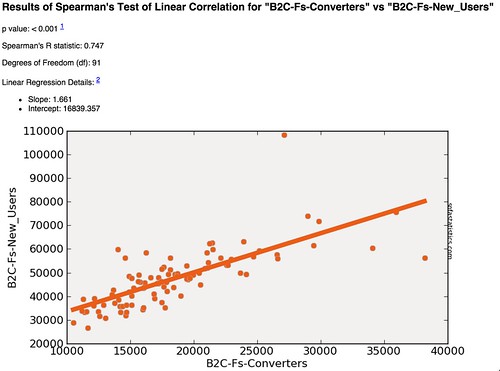 Strong, as seen above by a Spearman correlation of .747. If you’re unfamiliar with Spearman correlation, it’s a scale between -1 and +1. A +1 means a perfect correlation; as variable 1 changes, variable 2 changes in exactly the same proportion. Above, we see new users and conversions in a strong relationship.

What about returning users and their relationship to conversions? 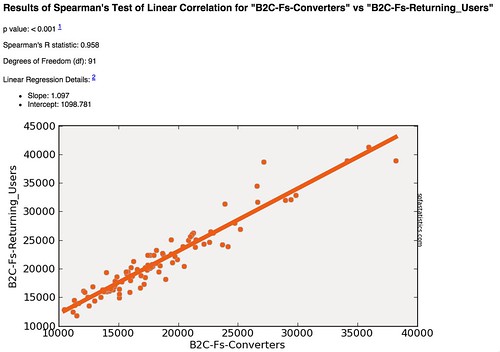 That’s an incredibly strong .958. Returning users and conversions are very tightly bound together.

Let’s look at something a little more mundane, a B2C consumer packaged goods (CPG) company, someone who sells brick and mortar goods. New users and conversions look like this: 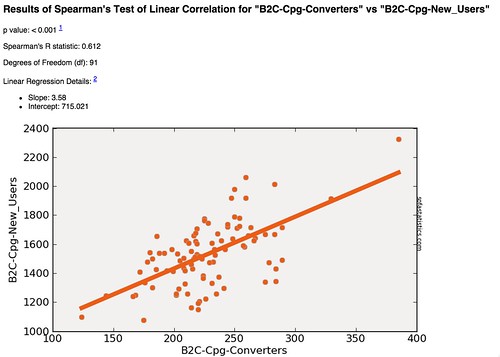 The correlation is still a moderately strong .612 for new users and conversions. What about returning users? 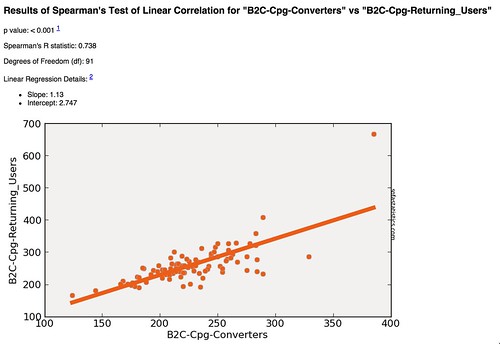 We’re at .738 there, a strong relationship. Returning users correlate more strongly to conversions than new users for the B2C CPG company.

Let’s flip over to our colleagues on the B2B side. What about a B2B technology company, the kind of company that has long sales cycles and expensive products that only other companies buy? 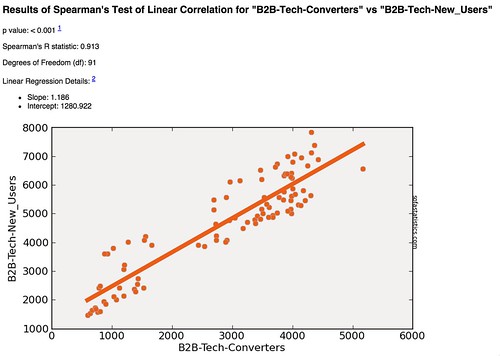 The relationship of new users to conversions is .913. Very strong. What about returning users? 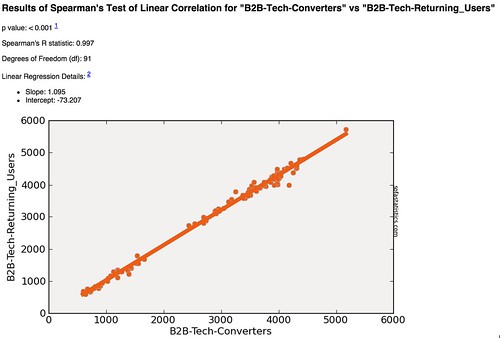 That’s as close to perfect as you’re going to see in the real world, a super strong relationship between returning users and conversions.

What can we conclude from these three cases above? While new users to your website are important for growth, returning users show incredibly strong relationships to conversion.

Thus, if you’re walking into a Google Analytics installation that has no goals set up, but you still need to judge how things have gone so far, I’d say you can safely use returning users as a general proxy for success while you get goals and goal values set up correctly. Inside Google Analytics, you can examine, using segmentation, which channels drive returning users most and best. You can see what pages attract returning users the most, and ultimately use that as a foundation for determining intermediate goals.