One of the real world marketing questions I’m asked often is whether events and conferences matter, from a marketing point of view. Do they help to generate business? The answer is a qualified yes – as long as you do it right. 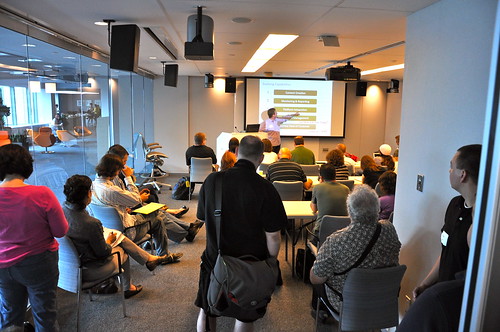 First, if you don’t know why you’re going, don’t go. “Because our competitors are there” isn’t a great reason. Ask if your audience is at the show. The easiest way to establish this? Look at the previous year’s hashtag on social media and who used it, then randomly sample the Twitter biographies of people who used the hashtag. If their names and titles are your audience, then you have a reason to attend the show.

Events are excellent for introducing your company to the target audience, but you have to provide ways for people to have those introductions.

To make the most of the show, you need three key elements. The first is the spotlight. Obtain this however you can, if you are committed to attending the event. This may mean earning a speaking slot or paying for it. This may mean a significant sponsorship that ensures show organizers will name drop you repeatedly throughout the event.

The second element is the anchor. This is the exhibitor booth. At some shows, particularly larger ones, sponsorship and exhibiting are separate animals. You need an anchor at the show, a physical location you can use as a base of operations, a rally point, and a focus. When you have speakers on stage, it’s easiest for them to say, “If you have questions after this session, come meet me at Booth 176” rather than have them loiter around, especially if the show has a packed schedule.

The third element is the foot soldiers, the street team, the ground staff you have at a show. These are the folks who move around the show floor, providing intelligence, gathering competitors’ collateral and speaking to competitor sales personnel. Your army can help staff the booth in a pinch, but also goes out and networks with attendees. For those connections that are relevant and valuable, foot soldiers can direct people back to the booth or to a speaker’s session. Foot soldiers also use social media effectively during the show, sharing other speakers’ content but heavily promoting your own. Given how many conferences feature social media leaderboards for most retweeted speakers, content, and people, your foot soldiers can play a key part in being seen.

With these three elements in force, you can maximize your appearance at a trade show. People will remember you, connect with you, and quite possibly do business with you. The very best executions of this plan make you so prominent, you’re on equal or greater footing than the show itself.