Do influencer lists and awards matter?

As happens every time another “influencers” list appears, reactions in the marketing community range from “OMG GRATS” to “This is BS”. The better question is, do these sorts of things matter?

The short answer is: only you can tell from your data.

If you’re a recipient of an award or listed in a directory of names, then check your marketing analytics. Did your data significantly change above and beyond normal activity?

For example, here’s what the average increase/decrease numbers of Twitter followers (the very, very top of the social funnel) look like for my account over the last 60 days, plotted with a 7 day moving average: 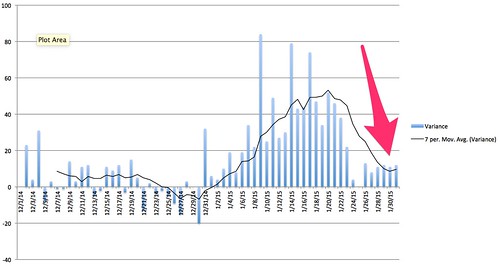 Note that the last couple of days, when a new award came out, are noted with the giant red arrow. The variance of new followers hasn’t substantially increased compared to what early January looked like. Thus, it would appear that for the top of my marketing funnel, new awards and lists don’t provide a huge bump.

Dig into your marketing automation system. If you’ve won an award, check the input field where people can tell you how they heard about you. Review your inbound email notifications. If no one ever mentions lists or awards, then you know that for your business, it doesn’t matter. If people mention awards you’ve won frequently, then you know they matter.

Only you can make the determination whether awards matter to you and your business. If they do, pursue them with vigor! If they don’t, then just smile, politely say your thanks, and move onto the next thing.